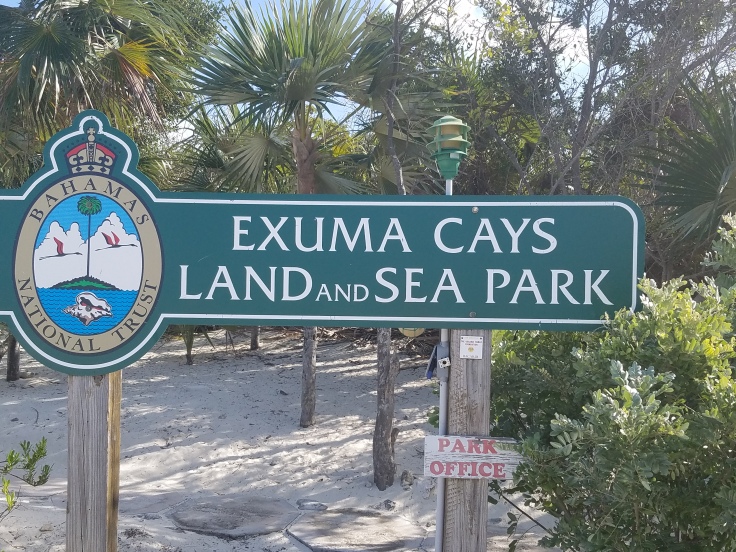 I’d like to start off by saying two important things: 1. I do not have words to describe the beauty of the shades of blues and greens of the waters. Beautiful, gorgeous, amazing, breathtaking…all are appropriate but don’t seem to do justice to Bahamian waters.

Looking for sea stars. In the clear, shallow water.

For the first time in the Bahamas we left marina life and anchored at West Bay at New Providence for one night. The water was so clear we could see our chain and our anchor buried in the sand…that was also a first. We are used to American waters that are murky or with grass and mud so we can’t see the bottom. Sometimes while crossing from cay to cay the water is so clear and shallow (10-12′) we can admire sea stars on the sandy bottom.

We then headed to our first stop in the Exumas Cays, Highbourne Cay, a private island with a marina and a nice restaurant. In the anchorage were two couples we had met at Great Harbour and they took us to a lovely spot to snorkel. I actually did it! I actually got in the ocean and snorkeled! I saw beautiful fish and coral and managed to focus on my yoga breathing at the same time. I was rather proud of myself (Scott said he was ecstatic!). We tried the conch fritter for lunch at the Xuma Restaurant but were not impressed as it was quite greasy. We walked on to the end of the dock to a large fish cleaning station. I was admiring the views and didn’t pay attention to the clumps of grass and rocks below. After a few minutes Scott pointed out the nurse sharks below. What I thought were grass and rocks were actually about 24 sharks lounging on the bottom waiting for their next meal.

After two nights at Highbourne Cay we cruised into the Exuma Cays Land and Sea Park, the oldest of it’s kind in the world. 22 x 8 nm around a chain of islands where there is no fishing or shelling and everything is protected. Our first 3 nights were at Emerald Rock where the mooring balls were spaced further apart and there wasn’t as much current as in the north mooring field in Warderick Wells. On our first attempt to grab their new mooring ball we learned two things: their lines and thimble (metal rope eye) were super thick, therefore, extremely heavy and the skinny black line with a float is not designed to attach to the boat. I managed to grab the black line easily and tie it to the forward cleat … then, POP, it broke. Dang! We finally succeeded after much futzing around. Catching a mooring ball on a boat with a high bow is not easy as it must be caught from further aft and brought to the bow.

We hiked along the porous and razor-sharp spiked “rock” formed from the winds and sand on trails and ended up at BooBoo Hill. It is tradition for cruisers to bring an offering of a piece of wood with the boat’s name on it for Neptune to assure safe passages. Legend has it that a ship sank and all passengers perished but at night you can hear their spirits howling. We also visited the park headquarters several times. By the back stairs to the office was the only place we could get sketchy cell signal. We also had to confess to Cherry, the park attendant, that we had broke the little black rope. How embarrassing.

We saw several 6′ black rays swimming by the boat and had a close encounter with a small gray ray that was resting in the sand that watched me as I approached to get a better picture. On one of our trips ashore the dinghy had an interesting experience as the tide had gone out further than we expected and it was left high on the sand, dry and listing.

We saw several 6′ black rays swimming by the boat and had a close encounter with a small gray ray that was resting in the sand that watched me as I approached to get a better picture. On one of our trips ashore the dinghy had an interesting experience as the tide had gone out further than we expected and it was left high on the sand, dry and listing.

The full moon occurred while at Emerald Rock which means there are higher and lower tides than usual. This is important to note as the Bahamas is known for it’s shallow waters, called the “banks.” Scott has deemed this trip “Don’t Touch Bottom” which Unforgettable has not done. In planning each leg our travel route and time is often determined by the tides.

On to Cambridge Cay where we were so excited to meet up with friends, Greg and Lisa, on Privateer (Kadey-Krogen 52), the mooring hosts for the month of February. 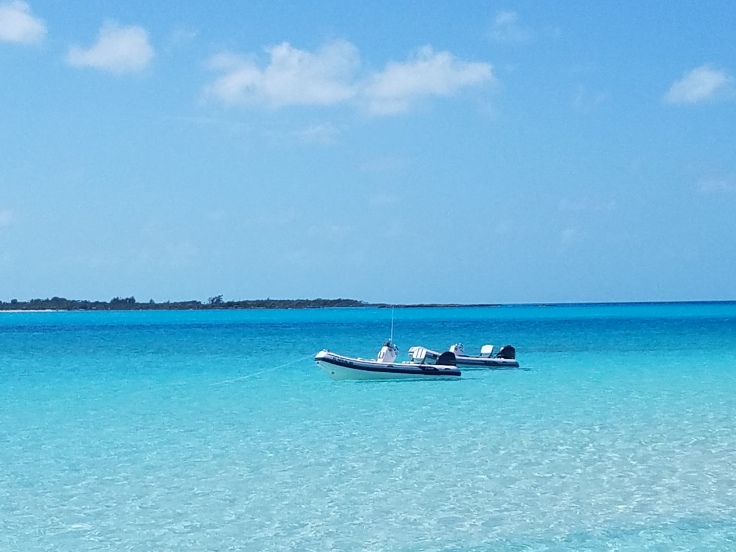 They took us hiking, snorkeling, picnicking, to a queen conch nursery, to the aquarium, and to Rachel’s Bubble Bath. Annette and Anthony on Magnolia (Kadey-Krogen 42) joined us for 2 nights so we enjoyed exploring and happy hours with them as well. The snorkeling in the coral reef known as the aquarium was fabulous until Scott and I went to the wrong area and got caught in the current. I have never breathed so hard in my life swimming back to the calm reef.

As we attempted to catch the mooring ball in Cambridge Cay we again, broke the black line. Luckily, we had Lisa and Greg on their dinghy helping us literally “learn the ropes.” We noticed that there were several other boats that needed assistance with their mooring. It was interesting watching the mega-yachts with their huge tenders (dinghy) 2 – 4 outboard engines 500 – 1200 hp. The crew on the tender would lift the lines up to the boat of the mega-yacht making the crew on deck’s job much easier.

Greg has been Scott’s trusted advisor for everything Bahamian (weather, including seas, anchoring/mooring on the banks, and detailed first hand experience of most of the islands) with great mechanical and electrical boat knowledge to boot. Lisa has given me a valuable lessons in ways to save water and reduce waste.

It’s hard to believe these pictures were taken on cell phones and are not enhanced. You simply cannot take a bad picture here!