4th of July parade in Annapolis.

Sandy Point State Park where the sand stains your skin. 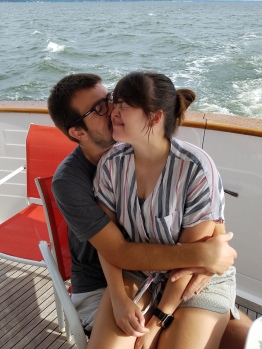 Allegra and Brandon in the Chesapeake.

We spent a marvelous 4 days with my daughters, Allegra and Cassandra, and their boyfriends, Brandon and Noah, in Annapolis.  The seas were calm while traveling back and forth from Solomon’s Island and just a few showers while docked.  We tried some new restaurants such as Dry 85 which had the best french fries I’ve ever tasted.  We took an Uber to Sandy Point State Park so the kids could visit the beach.  As a state park it was outstanding; as a beach it wasn’t so great.  The sand stained our skin and it was extremely crowded.  We also toured the Naval Academy for the second time and I loved it just as much as the first.  In fact, we visited the museum this time and it really is a “must see.”

You may be tired of seeing sweet Simon, Allegra’s dog. These are the last photos for awhile. 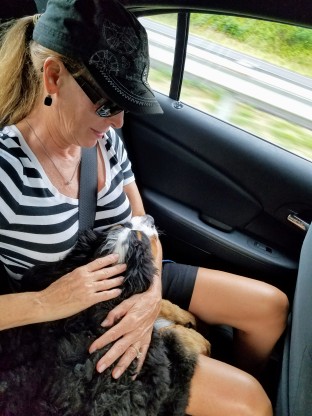 He’s such a snuggly boy.

Finally, on July 8 we hit the road again, well, hit the water again.  I love the rhythm of traveling days even when there are several in a row.  We tend to leave as soon as we awake and nestle into the pilot house for the day.  We hang out together, only going below to cook, do a quick chore or take turns working out.   I also love the anticipation of checking out a new location.   I don’t even mind long days such as the 87 nm. day cruising from Solomon’s to Chesapeake City, MD nor the 112 nm day cruising from Cape May, NJ to Sandy Hook, NJ.

In Chesapeake City, Scott lowered the new Rocna anchor and what do you know?  It didn’t grab hold! What a disappointment!  Up it came, covered with mud and another anchor and chain!  The second try it caught immediately and we felt safe for the night. 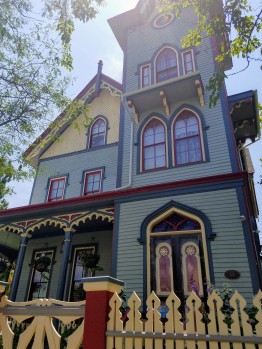 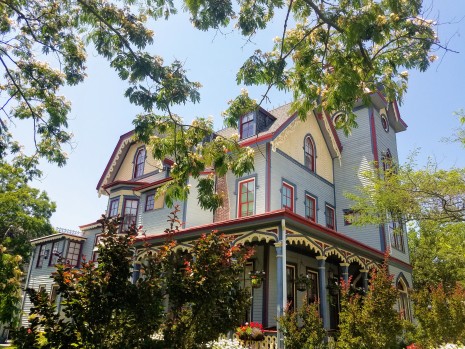 We cruised with the tide through the C & D Canal and most of the way down the Delaware and hit a whopping 11.5 knots.  We were traveling so quickly we decided to go all the way to Atlantic City and check out the casinos.  Unfortunately, there were no slips available so we made a quick visit to Cape May.  Cape May is a lovely town with over 600 Victorian era homes and is listed as a National Historic Landmark district.  We took a 7 mi. walk stumbling constantly because we were distracted admiring the detailed architecture, the interesting color combinations, and the gorgeous flowers.

That night a storm arose with 30 k winds and the anchor dragged about 50 ft. in the soupy mud.  It was a good thing that we dragged because the boat in front of us dragged about 200 feet! Poor Scott had to go out in the rain, wind and lightening to relocate.  When we awoke the next morning dang if we hadn’t dragged again…this time only about 10′.  Perhaps we need to resort to our old Delta anchor?

We tried out the Rocna in Sandy Hook, NJ for one night and it worked perfectly.  Then on to one our favorite anchorages…between the Statue of Liberty and Ellis Island.  This is also the most rolly anchorage due to major commercial traffic, many, many ferries and personal water craft.  No matter how difficult it was to vacuum, lower and lift the dinghy, put in eye drops, or to take multiple items out of the refrigerator, the views were totally worth it.  I never tire of watching the Manhattan skyline.  It amazes me that the crazy, busy, cacophonous city appears so calm and peaceful from the water, especially at night.  The first night we anchored there I couldn’t sleep because I was so excited.  In fact, I got out of bed several times just to admire the city lights. 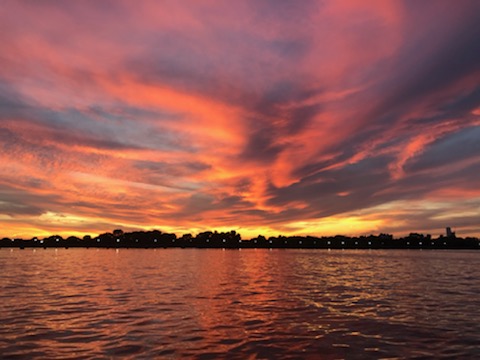 Despite the challenge of deploying an 800 lb. dinghy, while swinging wildly due to the boat rolling side-to-side non-stop from the waves, we managed to put it to use every day.   KJ and Matt on Chicane III had their very first attempt at anchoring and joined us for dinner one evening.  While we were all sitting on the fly bridge and the dinghy was tied with 3 lines to the side of Unforgettable, KJ commented that it looked like our dinghy was floating away…sure enough, 2 of the lines had broken! After a fast trot down the steps to the aft deck we added more lines.  Later, the four of us delighted in a dinghy ride around Lady Liberty in the splendor of a full moon.

We celebrated our 3rd anniversary in Little Italy and the following day we saw the musical Cher which was fabulous!  We drive the dinghy to the marina in Jersey City, NJ, take the ferry to Brookfield Place on Manhattan, walk to the Oculus (which is a beautiful train station), take the subway to a stop near our destination, then walk the rest of the way.  Obviously, we have to start about 1.5-2 hrs ahead of our preferred arrival time.  I enjoy walking in the city and riding the subway.  I love hearing the different languages, seeing people of various races and cultures, looking in the stores and admiring the architecture so every day that we spend in the city is a pleasure.

Our last night at anchor we had quite the thunderstorm with 45 knot winds and the Rocna held fast so I guess it has earned some points.  Tomorrow we move into the Liberty Landing Marina in Jersey City, NJ.  This will mean we won’t have to worry about rolling out of bed, we can empty the boat of 1.5 wks. of trash, catch up on 1.5 wks. of laundry and use all the water we want!