We got a late start leaving the marina in Gerogetown, SC, because we had to wait for the tides to rise (1:20 p.m.).  Since we left so late we decided to go for it one more time… onward to the Atlantic for a third overnighter.  We had a quick trip, only traveling 160 mi. in 22 hr.  It was another gorgeous day, following by a stunning night and glorious sunrise.  The first overnighter was a bit scary being alone and in charge at night but this time it was calm and enjoyable.  We did much better going to sleep in a timely matter during our rest shift resulting in no crankiness on my part this time.

I did have a few sad moments when I saw trash in the Atlantic.  There were 2 plastic jugs and a foil helium balloon.  We, as a whole, really must do better at protecting our planet and all those that live upon it.  I’m sure the person that lost the balloon at a party didn’t think that it would kill an animal but that is quite possibly the ultimate outcome. 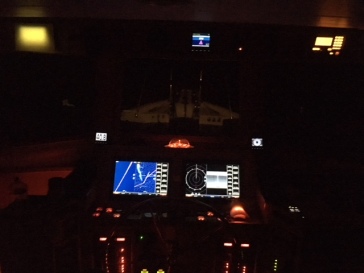 The above two pictures are what it looks like to cruise at night while sitting in the pilot house captain’s chair.   There is nothing to see out the front windows.   All of the driving is with instruments, some of which are shown here with and without the interior red lights on.   The overhead instruments which are lit are the stabilizer control, the auto pilot head and one of the VHF radios.  The three instruments above the drive screens are the depth, the magnetic compass and the wind data screen.  The two large drive screens are set up with split screens:  the left one is a zoomed in chart and a zoomed out chart.  The right one is radar and FLIR (night vision).  The instruments below the large screens are the engine controls and below that are fuel use data and 50+ electrical switches.  In the right picture, with red interior lights on, are the paper charts.  At a later time we will expand on our night driving electronics in laymen’s terms, per request.

Scott was overjoyed to replace all of the electronics.  In budgeting for the boat the first priority always goes to safety and we certainly do feel safer with all the new “gadgets”.  It is comforting to know that with new instrumentation we are less likely to experience a failure, especially while in the ocean or after dark.  The FLIR is night vision and AIS identifies ships’ positions, speed, course, etc.   He has lusted for a FLIR and AIS for a few years.  I guess dreams do come true!

We dropped anchor by the Cape Lookout Lighthouse near Beaufort, NC in a beautiful anchorage with grassy sand dunes on two sides of us.  After a nap we spent the afternoon giving the boat a much needed interior cleaning.  We were invaded by a few dozen horseflies after we left Georgetown and the pilot house was like a graveyard.  Fellow Kadey-Krogen 58 owners, Neal and Margretta, dinked (drove their dinghy) over for drinks, fresh out of the bread-maker rosemary bread, and dinner.

We are planning to sleep in and check out the area tomorrow.