I don’t really enjoy transcontinental flights but mit was worth it to see my son, Clayton. It took 4 flights to get to Frankfurt from the small and charming airport in Wilmington, NC. I was quite surprised when they pulled me aside in the security line to check my backpack which was full of snacks. Apparently now they have to make sure it’s really food in the packages. We flew to D.C. then Newark to board the budget Icelandic airline, WOW. No drinks, no snacks, no entertainment but the flight attendants looked great! They were young and attractive in their smart purple uniforms with gloves, matching hats and jackets. We changed planes in Reykjavik then spent the next leg of the journey in seats that didn’t lean back since they were in front of the emergency exit. By then I was so tired it didn’t matter and I slept totally erect.

Clayton was a sight for sore eyes and I could have hugged him all day long! It had been two long years since he had visited us in the states. It was such a blessing to spend 8 days traveling together!

We landed in Frankfurt which is the fifth largest German city and is a major financial hub.

I started studying German on the Duolingo app several weeks ago and really came to enjoy learning a new language. My limited knowledge was quite helpful on many occasions. It’s not actually true that everyone in Germany speaks English. By listening, reading and attempting to speak German, my knowledge and skills grew tremendously. So much so that I plan to continue with Duolingo.

In high school my jazz band played a ten day European tour and the highlights for me were the day cruise on the Rhine River and Lucerne, Switzerland. With this in mind we tried to book a cruise on the Rhine between Rüdesheim and Koblenz. No such luck, the water level was way too low. We saw many boats on their sides and an abnormal amount of “bottom” exposed. Plan B was to drive along the banks of the Middle Rhine Valley which gave more attention to the cute little towns but less attention to the castles in the UNESCO area.

We stopped to tour the virtually unchanged medievel Marksburg Castle in Braubach being the only castle never to have been destroyed. The terraced vineyards along the river were beautiful just as I remembered them.

Since we decided to focus on Germany for this trip, in lieu of visiting Lucerne, we traveled to Garmisch-Partinkirchen, a lovely swiss-style village at the base of Zugspitze, Germany’s highest mountain in the Bavarian Alps. I could wax on and on about the picturesque beauty of the homes, mountains, fields, cows with bells clanging, etc. Suffice it to say that this was my favorite spot. The cold (8°F) and wind at the top of Zugspitze was quite a shock to our warm-climated bodies.

While in the neighborhood we toured Neuschwanstein Castle.

We spent a total of 3 nights in my son’s home in Schrollbach and explored Ramstein Air Force base. Although it could not compare in nature to his base in Anchorage, Joint Base Elmendorf- Richardson, which was spectacular, it was very lovely. We haven’t seen fall leaves in a couple of years so the colors of the trees and leaves were like eye candy. 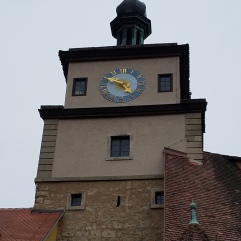 We also stayed over night in Oppenheim, Miehlen, Rothenberg Ob Der Tauber, and Munich. Our favorite spots were the historical areas with old-world charm. Scott’s favorite village was the old town area of Oppenheim. The narrow, winding streets of cobblestone on a sloping hillside that were rarely marked gave him the feel of what life long ago must have been like. Two of Clayton’s highlights were Zugspitze and the huge shower in our first airbnb. At 6’3″ I guess size does matter! 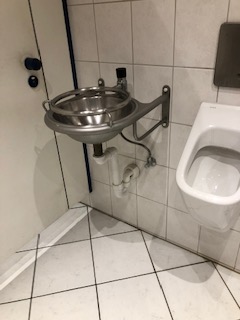 11. Vomitoriums were common in student towns such as Heidelberg and Munich.

10. Every place had nicer, softer, toilet paper than we have on Unforgettable.

9. Meals were inexpensive with large portions but high taxes. 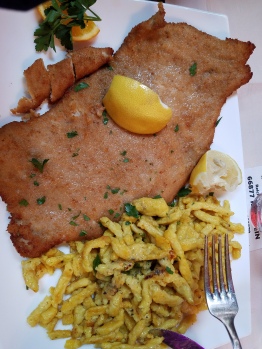 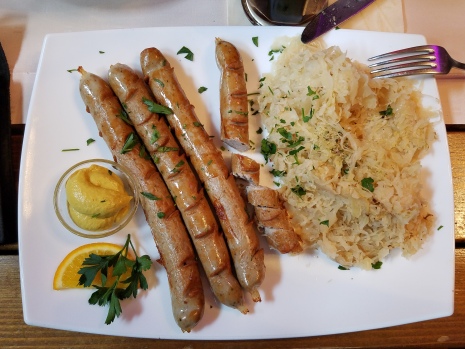 7. Usually the only vegetable was potatoes in some form of fat. But who needs vegetables when your plate is full of meat? Scott was thrilled to eat sauerkraut at every opportunity.

6. Cigarette machines were everywhere and in the most unlikely places like on a pole in the middle of a nice subdivision.

5. There was an abundance of great bakeries at which we indulged many times. There was more space devoted to candy than healthy food in the stores we visited. Germans must have quite the sweet tooth.

3. Most bathrooms had heated towel racks… perhaps we could find wall space on the Unforgettable to install one?

2. A typical beer list consisted of four kinds of beer: helles, dunkel, heferweissen and pils. Rarely brands were noted as they were locally brewed. No one served tapwater, unless requested, one received bottled sparkling water.

1. Why were the people so unfriendly? We were informed that Germans are not typically friendly unless you are already friends. We tried so hard.

Until next time, Clayton, hopefully it will not be two years!

Next stop…a five night layover in Iceland! Hopefully we can view the northern lights.

2 thoughts on “Germany: Our non-boating adventure”