We have found each of the chains of islands to be quite different in various ways.  The Abacos stand out with their clear green waters, charming towns with pastel homes, green sea turtles, beautiful trees, lush flowering bushes, lovely restaurants on the beach with pools, and cays that are close by so it’s easy to island hop.  It’s easy to see why it is more populated than the Exumas or Eleuthera and why Scott has found his happy place!

Our marina for 3 nights was incredibly safe. 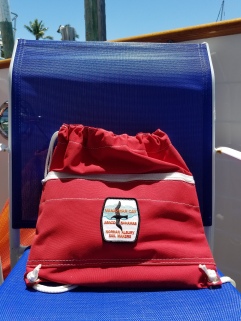 We watched the ladies sewing these bags in the little shop. 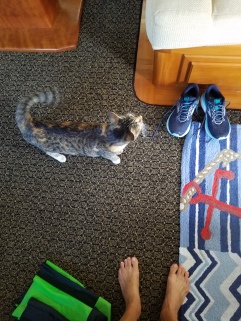 We had a boat cat for a hot minute!

The main thoroughfare, Queen Street, and the grocery store. 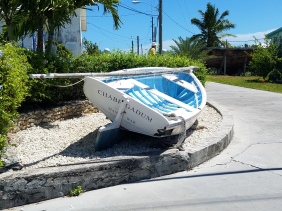 Beautiful sites on our walks out of town.

So many flowering bushes that we hadn’t seen before.

Man-O-War Cay, named after the bird, is a sleepy little island that was originally populated by loyalists from the U.S. in 1798.  The two main narrow streets accommodate only golf carts on the 2.5 mile island. This quiet island is known for it’s former boat makers (The Alburys) and quality handmade products such as my new bag and wood products.  The flowering bushes were overflowing with blossoms that we had never seen before.  I found the accents and speech patterns of the white Bahamians quite interesting, not exactly British and definitely not American either.  Most of the 220 inhabitants are white and descendants of the Alburys.

Fellow Krogenites, Bill and Laurie on Lali were there and we enjoyed some lovely happy hours and meals together. We realized that we would be crossing back to the U.S. at the same time. They visited the Abacos last year so they showed us some wonderful spots while “buddy boating.” 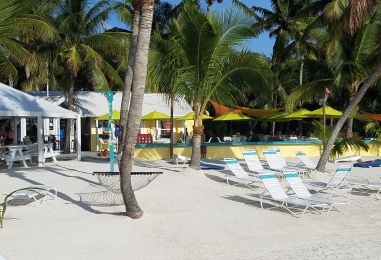 Grabbers (the pool is behind the low wall)

So many of the restaurants/bars are not only on the water with gorgeous views, they also have pools!  We only anchored at Great Guana for one night, just long enough to hit the two hot spots…Grabbers and Nippers.  We even tried one of the famous local rum drinks, Goombay Smash. 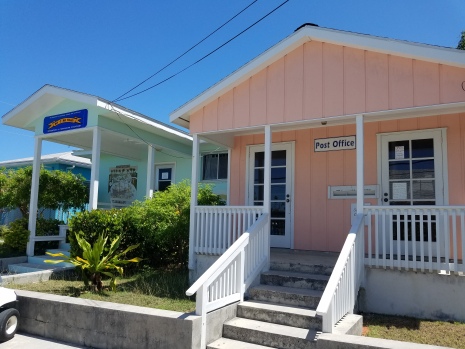 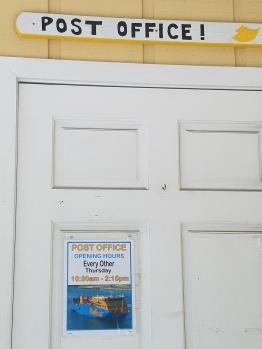 We had heard that mail was extremely slow here, now we know why!

Treasure Cay had a was lovely marina with a pool, restaurants, and a very short walk to a nice grocery store, church and drop-dead gorgeous beach. The colors of turquoise in the water at this beach were some of the best we have seen.  We saw plenty of green sea turtles lolligagging in the marina.  We were amazed at how quickly they could sprint when they saw us coming in the dinghy while on our dinghy adventure. 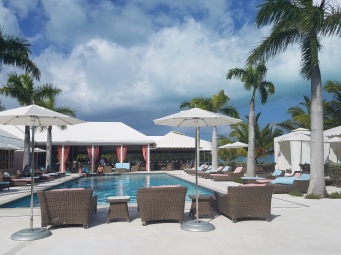 Can you believe that restaurants have pools?

Scott sucking in his belly!

Bill and Laurie joined us for an adventure on the dinghy going through the mangroves to see the turtles.  Crazily, we went at low tide which ended up to our advantage because we saw at least 2 dozen turtles just while going in.  They are much easier to view in shallower water.  We were rewarded with a visit to Treasure Sands, another gorgeous pool/beach/restaurant. 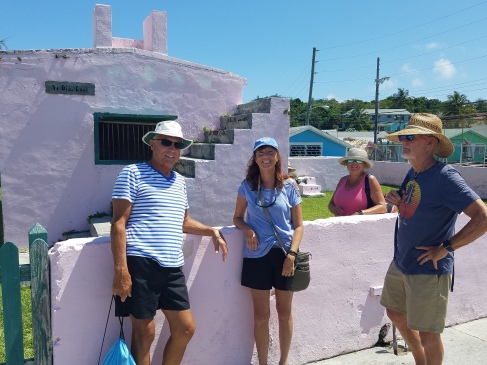 Bill, Laurie, Caroline and Scott at the old jail. Kevin is inside the jail cell. 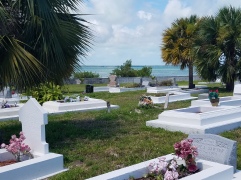 Final resting place by the sea.

Gorgeous beach at the north end of the island were we searched for sea glass. 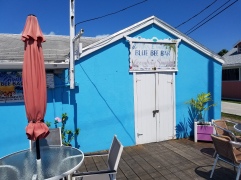 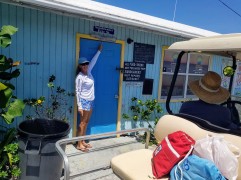 Sundowner’s. Read the fine print…”Irene not allowed.” Irene was my given middle name. I hated it so changed it when I married.

Finally, Green Turtle Cay Marina, another wonderful marina with a pool, beach and a restaurant. Green Turtle Cay is named after the abundance of Green Turtles in the area.  Caroline and Kevin on Redtail were anchored nearby so they joined Bill, Laurie and us in renting golf carts to explore the island.  This Loyalist island started in the late 1770’s and is home to 450 residents.  New Plymouth is the main settlement and is reminiscent of a New England village.  Oddly, this was the birthplace of the Methodists in the Bahamas and there is a Methodist church but no Methodist congregation.  We attended a lovely Mother’s Day service at the Community Church located in the Methodist Church building.

Next stop, Manjack Cay to see more turtles and a count down to cross over to the USA.