Thick fog surrounded Unforgettable rendering us unable to see more than a quarter mile for most of our journey from Wickford, RI to Martha’s Vineyard, MA.   So dense in fact, we had to turn on our auto-horn which sounds a single prolonged blast every two minutes to alert nearby boaters.  The 100 mile island is comprised of 6 villages:  Aquinnah, Chilmark, West Tisbury, Vineyard Haven, Oak Bluffs, and Edgartown.  Our first stop was an anchorage at Menemsha, a small, simple, fishing village.   Menemsha is actually a part of Chilmark, the town with the highest priced homes in the state of Massachusetts.  There’s nothing fancy about Menemsha though: a few small “shacks” with awesome fresh seafood, an extremely crowded beach, and the location where parts of the movie “Jaws” was shot. 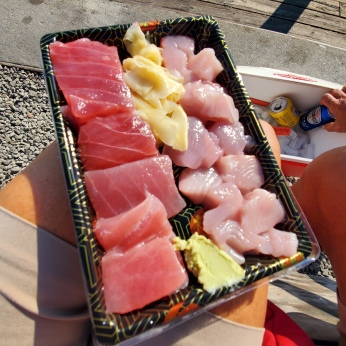 We watched the fishermen carry buckets of fish right into the shacks. Here we had the bonito and yellowfin.

Our first day there we walked through the tiny village and learned that it was “dry”, meaning they don’t sell or serve alcohol but you are welcome to drink it while walking down the street.  The man that runs the Sashimi Shack explained the rule to us and concluded that this allowed people to take their drinks to the beach to watch the sunset.  That meant a return trip back to the boat to grab a couples of beers before returning to the Sashimi Shack to order the 1/2 bonito, 1/2 yellowfin tuna special.  The man also told us tales of how he was in “Jaws” as a boy and how the seals are now proliferating on the island so the shark population has also increased. 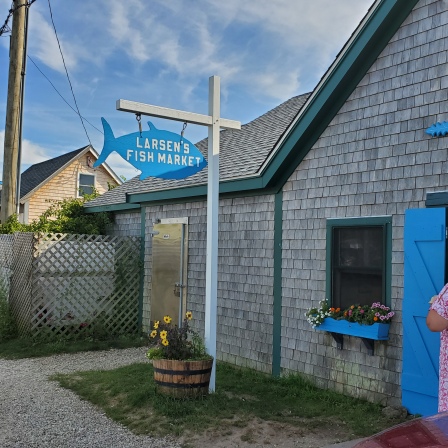 Long lines out the door for the ultra-fresh seafood at Larsen’s Fish Market.

The ultra buttery lobsta roll tasted even better as it was eaten on the docks.

When we decided to buy the wonderful hot buttered lobster rolls at Larsen’s for dinner the line was out the door.  This is the typical summer evening:  everyone gets carry-out seafood and takes it to the beach to watch the famous sunsets.  In fact, the beach was jam packed and people had to park miles away.  Unfortunately, two out of the three nights we were there the sunset was completely covered by clouds.  One night we ate at Home Port, the only sit-down restaurant in the area.  While asking the bartender questions about the local quahog clams (I pronounced it kwa-hog with a long a), I noticed he kept snickering.  Finally, I learned that the proper way to pronounce the local clam is co-hog with a long o!  These are the largest clams and are often served stuffed.

Lagoon Pond Anchorage, located between Vineyard Haven and Oak Bluffs, was our home for the next three nights.  To enter the pond we had to go under the Lagoon Pond Bridge which has a 30′ wide opening.  Our beam (width) is 19′.  We held our breath and I sucked in my abs all the way through.  Son Scott and Chris joined us by ferry for the weekend and we explored Vineyard Haven, Oak Bluffs and the upscale Edgartown.

For a couple that eats Whole Food Plant Based we do splurge on land and eat seafood.  But I never order clam chowder because it doesn’t have much flavor. However, when we dined at Black Dog Tavern in Vineyard Haven we just had to sample the quahog chowder.  Now I will never order it again as it was the creamiest and most flavorful chowder I’ve ever tasted.  So good, we returned two nights later to have another bowl. 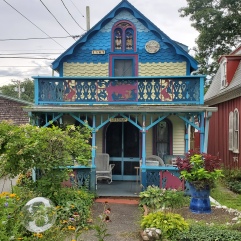 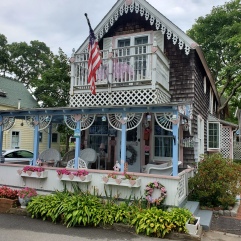 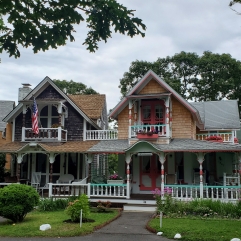 Oak Bluffs was considerably more touristy and crowded.  While perusing the shopping district we veered just a few steps and strolled into the Methodist Campground Association cottages.  It was like stepping back in time into the National Historic Landmark filled with delicate and detailed gingerbread cottages.  Originally in the early 1800’s this was a summer camp with tents and each tent was replaced with colorful cottages explaining why some are only 500 sq. ft. with virtually no yard.  Many of these are un-winterized homes which can be rented.

Son Scott and Chris rented bikes to ride to Edgartown and we took the well-organized bus which runs throughout the island.  We found a sale at the Lilly Pulitzer store and enjoyed checking out the marinas and boats.  I find it interesting how different styles of boats are popular in different areas.  The downeast style of day boats are popular here with the Shelter Island Runabout being one of the sweetest.

We regretted that we did not visit Chilmark or Aquinnah but we agreed that Menemsha was our favorite spot on Martha’s Vineyard.  We generally prefer the less pretentious and “out of the way” spots with less tourists.  On Sunday Scott and Chris headed off to NYC and we crossed the Nantucket sound to Hyannis.

Although we read all the forecasts for seas and weather one never knows what one will actually get.  We got a wet and wild ride with my favorite kind of seas…big waves and wind on the bow.  I don’t really enjoy driving the boat except in these kinds of seas and I  love the rise of the bow and the jarring crash down with the pounding of water on the pilot house windows.  Since we weren’t expecting the 6-7′ waves we hadn’t prepped in our usual way by stowing loose items, pressing towels into cabinets with glass items, etc.  When we docked we had quite a mess to clean up. 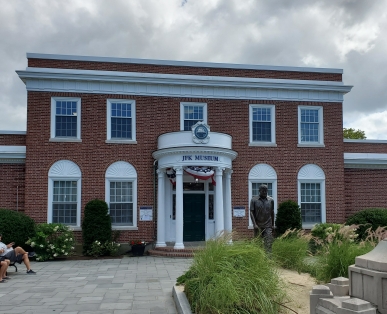 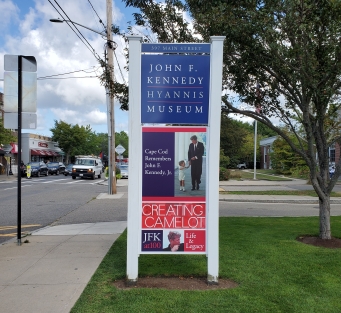 Wow, what an inspirational quote!

While docked in Hyannis we visited the JFK Museum which was mainly photographs.  It saddened me that Jackie and JFK never looked happy together nor looked like a real couple.  The fairytale life certainly had some cracks in it.  We also used the courtesy car to drive by the JFK home in Hyannis Port, visited a beach, walked around the downtown area, and ate some local fish.  We only stayed 2 nights as the docking was quite pricey!  Ouch!  As we travel further east we feel the temperatures dropping and the prices rising!

I want to see a whale! 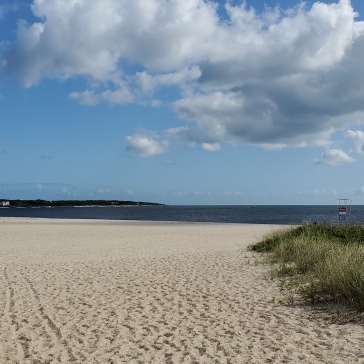 Next up…Nantucket!  I’ll be looking for whales and sharks along the way!

P.S. Because the blog is published a few days behind our actual travel please know that we are safe from Dorian.  We have made arrangements to be docked in a marina in a safe area when it comes up the coast.  We will post updates on our safety.