In the spirit of visiting new places we put Warderick Wells, located in the Exuma Cays Land and Sea Park, on our list of  “must sees.”  It was actually on our list last year and has been on my mental list for 5 years when I first started learning about boating in the Bahamas.  Last year we practiced our mooring skills in neighboring Emerald Rock prior to attempting a ball in Warderick Wells and we bombed!  We bombed so badly we broke the pennant!  Mooring is the only part of boating that causes me stress.

Warderick Wells is a horse-shoe shaped mooring field with 21 balls for boats of various sizes.  In the center of the field and surrounding the field is extremely shallow water, actually a beautiful sand bar at low tide.  There is very little space for maneuvering our fat bottom girl between the other boats and the shallows.  In addition, the currents are ripping for all but about 5 minutes of slack tide.  Therefore, we planned to moor in Emerald Rock again for one night prior to entering Warderick Wells just to practice our skills.  What a relief, we nailed it on our first attempt.  Whoo, whoo, we were so proud of ourselves! 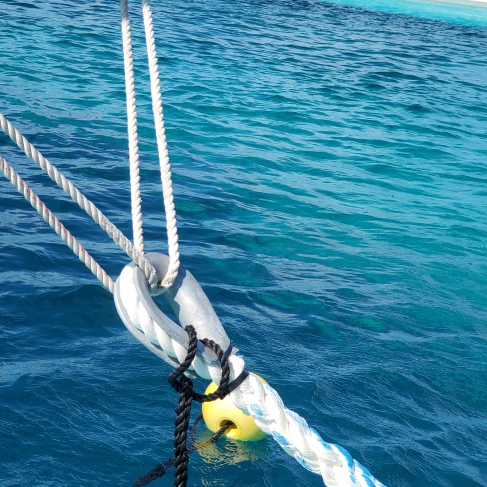 The mooring thimble and lines are extremely heavy. As first mate this tricky procedure is the most difficult part of my job. Scott moves the boat to a stop next to the mooring ball. I then put one line through the thimble and walk it to the bow and tie is down. 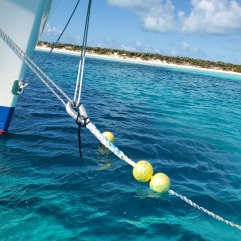 We then put a second line through the thimble and pull them equal. 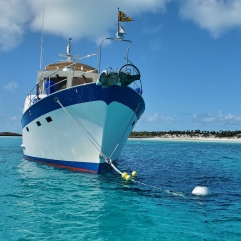 When done we are secure to the mooring ball.

Later that afternoon, Scott was checking the depth, knowing that we had a below mean low tide (minus tide) of 8″ coming, he determined that we would be sitting on the bottom in a couple of hours and had to move to another ball.  Oh, noooo, one great mooring in a day was more than enough for me.  We dropped the lines and drove around looking for another ball in a deeper location.  While searching, we realized that our tide chart had not been updated and we didn’t actually need to move so back to our original ball we went.  No problem, we had already aced it once, we could do it again, right?  Nope, we had a disaster!  I had trouble getting the pennant, then gentlemanly Scott left his wing drive station to come help me and we managed to tangle the triple strand pendent and thimble to the bottom of the boat.  What if it bent a prop?  What if it gouged the hull?  Scott had no choice but to dive to fix the problem.  Did I mention that 3 nurse sharks had consistently been hanging around the boat?  Thankfully, I learned how to identify a few sharks last year and knew for a fact that nurse sharks don’t bother humans.  I was still petrified that something would happen to my Captain.  He was scared that he could be hit with the violent release of the tangle around the a shaft and I would be alone on the boat.  The 2″ triple strand pendent had become wrapped around the line cutters.  He managed to remove it, and discovered that one of the blades had broke off and was stuck in the lines causing a small amount of damage.  All the while the nurse sharks were checking him out. He quickly climbed up the swim ladder before the boat and I floated away.  Now that’s a scary thought!

Now we have to do this a third time?  Luckily, the third go round was fine but hard work, physically and mentally, so we were exhausted!  The thimble eye and lines on the moorings in the park are extremely heavy and we were a bit stressed out.  So much so that we did not move to Warderick Wells the next day, we needed a day off. 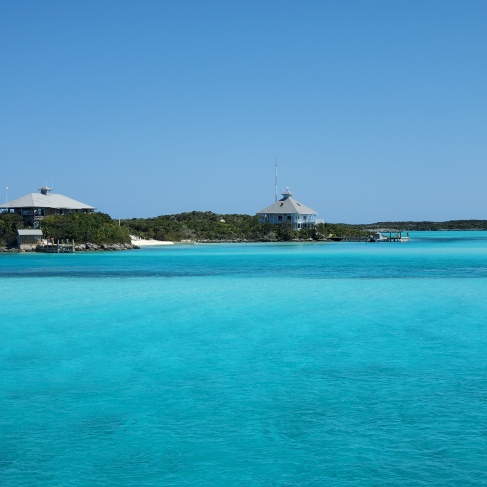 We had drop-dead gorgeous 360* views; the buildings are the park headquarters and the staff quarters as there is no other civilization on the island. 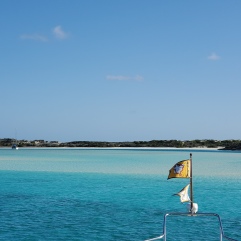 Another view from the Warderick Wells mooring. 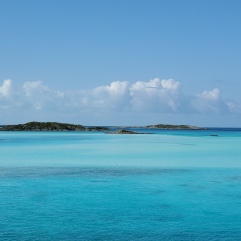 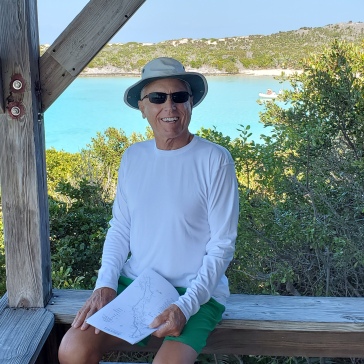 The Exuma Cay Land and Sea Office where there may or may not be 1 or 2 bars of cell service. 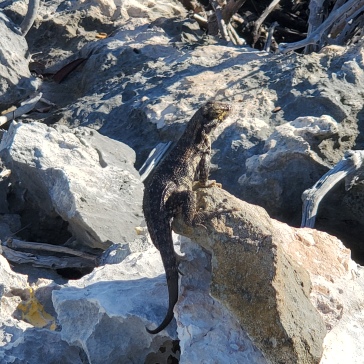 Lots of cute lizards that like to pose for the camera.

When we did complete a flawless mooring in Wells every bit of angst was well worth the resulting scene.  Pure bliss.  Yes, pure bliss.  The beauty brought tears to my eyes on a regular basis.  Paradise surrounded us, 360*.  I was perfectly happy to stay onboard the entire five days to enjoy our view.

Nurse sharks abound in Warderick Wells, as do rays.  Almost anytime I wanted to see a ray all I had to do was look outside.  I did this all the time, all day long!  Sometimes a lone spotted eagle ray would gracefully glide quickly by or groups, as many as 11, would slowly float beneath us.  Scott was brave enough to snorkel on top of the large school and take pictures.  Icing on the cake was a 3-4′ Lemon Shark hanging around at the beach with us one afternoon. 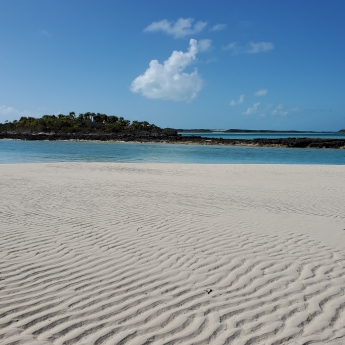 Ripples in the sand at low tide. 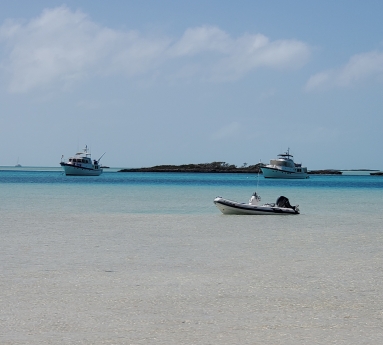 It was difficult to tear ourselves away from my favorite anchorage but we had to move on.  Further south in the Land and Sea Park we spent a fabulous two nights in Cambridge Cay with our friends, Greg and Lisa on Privateer.  We enjoyed a picnic at one beach, happy hour at another beach with other cruisers, and a visit to the Queen Conch nursery on another beach where we oohed and aahed over the multitude of juvenile conchs displaying various shades of pinks and oranges.  We also had a wonderful dinner on Privateer where they continued to share their knowledge and helped us plan the next legs of our trip.

As one can see, our favorite beaches do not have lounge chairs, cabanas or servers with fancy drinks.  Some people might not like the beaches whose only adornments are shells, rays, sharks, crabs, clear water and rippled sand!  I am always excited to visit these beaches as I never know what surprise will be awaiting.  For instance, the beach at Bell Rock was littered with beautifully formed brain coral…what a treat.  Regrettably (and fortunately), we were not allowed to take anything from the park.  Oh, how tempting, but in the park one can take only pictures and leave only footprints.

To expand our boating horizons our ultimate goal is to head southward to Turks and Caicos.  Our reservation from March 11-April 11 requires us to reach George Town, Bahamas, well in advance to await a weather window that would allow us to do a non-stop (240 miles in open Atlantic) to Providenciales, T & C. 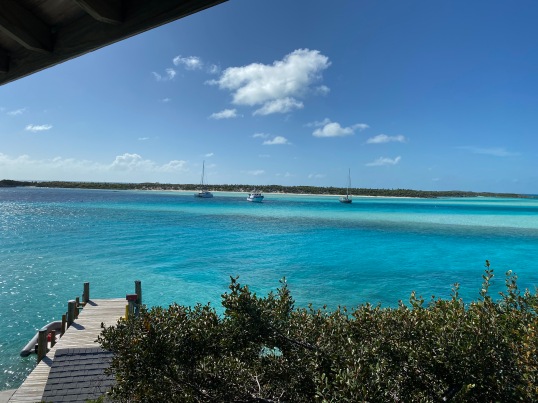