There was a bit of excitement as we left Norfolk.  We had a close encounter with the U.S. Naval aircraft carrier # 72 as we were exiting the Hampton Roads area.   Well, not thaaat close.  A Navy gun boat escorted us to the  “red” side (our port side as one exits an inlet) and told us to leave the channel and to maintain a 500 yd. distance from the carrier.  It was kind of cool to have the Navy hail “Unforgettable” on the radio and to hear their stern warning! 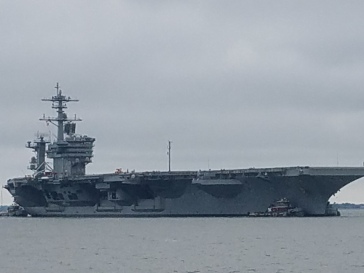 As we were going past the St. Elizabeth river our boat icon went off track about 30* on our Garmin electronic charts.  This was frustrating because we have had that problem twice before due to the electronic compass underneath our bed conflicting with the bed coils and  metal tools.  We were so confused because we had not put any metal under the bed to warrant the sudden change and had replaced the bed.  About 30 min. later it was suddenly aligned correctly!  Scott realized that we had passed a navy ship degausser which reduces or eliminates unwanted magnetic fields from their incoming ships.  What a relief to know that we didn’t have a new problem.

After a 15 mi. ride to Hampton, VA we arrived at the home of Teri and Scott Miller and their Kadey-Krogen 58, “Miller Time.”  Their lovely home had a dock big enough for both of our boats and their Robalo.  Teri pulled up blue crabs from her crab pots that hung from the dock.  She taught me how to pick out the meat from which she made yummy crab cakes for lunch.  These were her first of the season.

We had a fun 2 night visit that included dinner at Dead Rise restaurant, kayaking, walking the beach, eating grilled salmon dinner, doing yoga on the patio and going on a sunset cruise on their Robalo , T-top boat.  They were such generous hosts and allowed us to use their car to go  “purchasing”… West Marine, Wal-Mart and Food Lion.  It never ceases to amaze me how much stuff we can stuff into this vessel. 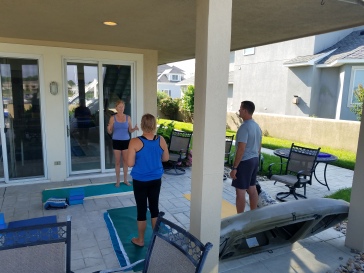 We also had the honor of meeting Teri’s mom, Gloria.  She was the most stylish and well-postured mom I’ve ever seen!  Charlie, their Portuguese water dog, won Scott’s heart and he doesn’t even like dogs!  At first Charlie was quite shy but giving him a few treats finally won his affection. 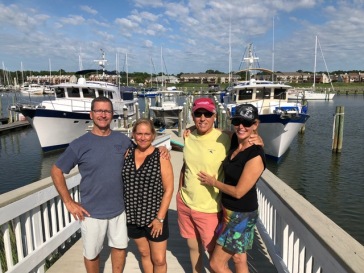 Thanks for an awesome two days, Teri and Scott!

Onward to the Potomac via an overnight anchorage in the Rappahannock!