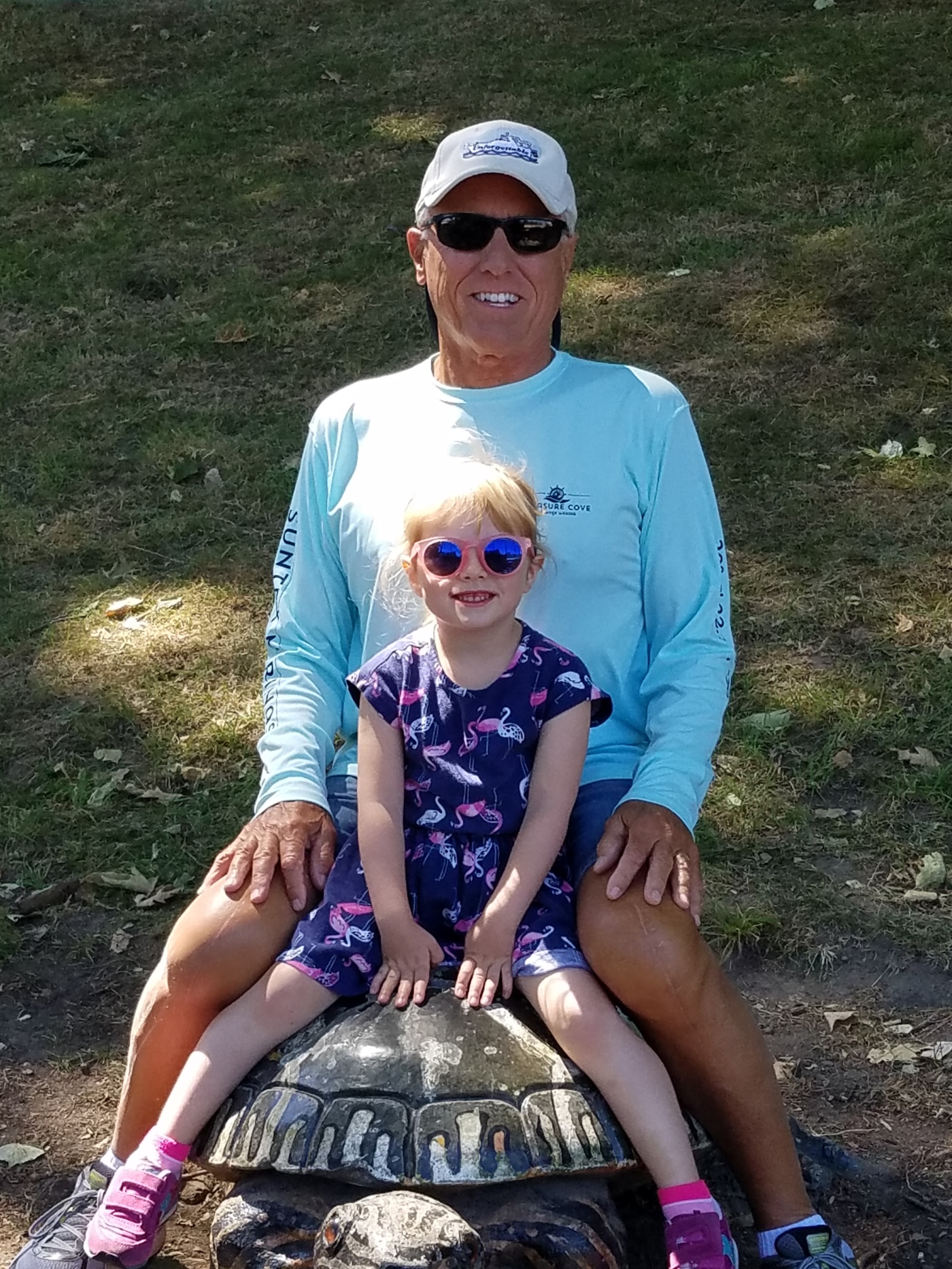 We left “Unforgettable” at Pleasure Cove Marina outside of Baltimore for 5 nights while we visited son Ryan, daughter-in-law Lindsey, and granddaughter Juniper in Seattle. I know that all grandparents think that their grandchild is adorable, charming and smart but Juniper truly is all three! We had so much fun playing fairies in the basement, playing games, riding the ferris wheel, giving the nighttime bath, and doing the bedtime routine. No matter how much fun we have when we are away from the boat we worry that something will happen while we are gone and are always happy to return to our home on the water. 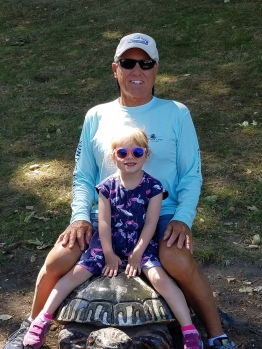 Seattle is gorgeous in the summer.  I love the tall, lush trees and the mountains!

View of the Olympia Mountains from the back deck. 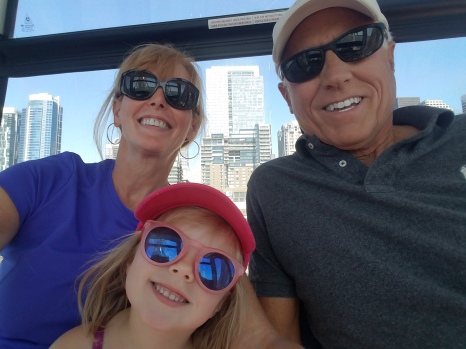 Fun on the ferris wheel. 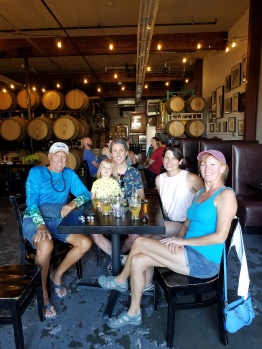 The day after we returned our friends from St. Louis, Gary and Jana, arrived to join us for our cruise into New York harbor. The first day we made it to Chesapeake City and anchored in a very tiny area next to the Chesapeake Inn and Marina. It was so small we only had 60′ of chain out. We know it sounds crazy but that was as much as we could deploy without hitting something or someone else. Luckily we had very little wind and the anchor did not drag.

If you are a boater you know there is always something broken on the boat or something is broken and you just don’t know it yet! This day was a double whammy, a broken bilge pump in the water and machinery room and a stuck windlass.

While in D.C. Scott purchased 2 new bilge pumps and installed one. That very new one cracked in half as we cruised, apparently from battery acid that leaked from a nearby battery.  Scott replaced it the following day so now we have no spares and we do not know how the battery acid is getting into the bilge. Those 14 batteries may need to be replaced sooner than we had planned.  This could be a $15,000 project.

In order to drop the anchor exactly where you want it the anchor should be able to free fall, not slowly power down.  When inside a crowded anchorage it is important to drop it in a precisely determined spot.  When Scott released the windlass, which lowers the anchor, the chain wheel got stuck on half of its cone clutch.  Not a major problem but one more item for Scott’s work list.

While traveling up the Chesapeake we were making decisions on how to deal with the impending winds and waves in the Delaware and in the Atlantic. We had planned to stop in Georgetown but decided to beat the storm and go to Chesapeake City and the following day go to Cape May in order to make it to Sandy Hook by 3 p.m. the following day. During the night we received an email from a friend and agreed with him that it would be impossible to beat the storm. In fact, we turned around and headed back to Georgetown on the Sassafras River to wait out the storm. A huge benefit of going to Georgetown meant a savings of $850 for 1000+ gallons of fuel (the 4 tanks hold a total of 1740 gallons) from what we would have spent in Cape May where we had planned to purchase it.

This picture was taken at the Granary restaurant and marina located near Georgetown Yacht Basin.  We have seen many man-made platforms for osprey nests here in the Chesapeake Bay.  This one was unlike any of the others in that it was a post, topped by a tree with a platform on top! I love that the folks here value their birds!  We saw many eagles catching fish and taking them to their nests in the woods next to the marina and had Great Blue Herons tip-toeing past the boat on the dock.

We docked at Georgetown Yacht Basin where the docks were in terrible condition but was it was inexpensive and had several nice amenities.  There was a well stocked marine store, a pool, and a loaner van.  The next day the rains began.  The forecast for that area was rain for the entire following week.  We tried out the van and went to a surprisingly sophisticated restaurant called Two Tree in nearby town of Millington, MD for dinner the second night. Unfortunately, they were out of octopus but every other dish we tried was top notch, especially the carrot cake!

After spending hours studying various weather sources and consulting with experienced boating friends we concluded that the rest of our guests’ vacation would be in the rain and probably would not culminate in NY.  We didn’t blame them for returning to St. Louis so soon.  It was such a disappointment that they would not have the experience of entering New York harbor with us.

We attended church in the neighboring farming community of Cecilton, MD.  We truly enjoy visiting the local churches and appreciated the intimacy of this service of only 42 people.  Afterward Scott began the windlass project and I did chores.  We also continued to monitor several weather sources and watch for the next possible weather window.  That evening we binge watched Grace and Frankie, a Netflix series about old folks!

The following day I managed to squeeze in a 4.3 mi. walk/jog in a light rain and Scott swam.  Then I enjoyed a lovely 13 mi. ride in the loaner van through farm land to the nearest Wal-Mart in Middleton, DE.  I hadn’t been to Wal-Mart in over 1 month so my list was looooong.  I get a bit frustrated going to a different store every time.  I only had to ask for help from 14 different people.  They had just completed inventory so after I searched and searched for an item then I would find an employee who would then join me in the search and finally conclude that they were all out of the items.  Scott had to disassemble, clean and lube the windlass which apparently wasn’t truly serviced by the service person that we hired to do it a few months ago.  He also polished all the new fuel.

In the last 2 weeks I have sustained two injuries: a torn rotator cuff and a gash in my leg.  The torn rotator cuff occurred after lifting up every single fender when their covers were wet making for a heavy load.  I have previously torn both shoulders but was unable to lift my arm either time.  This time it is lift-able so I feel confidant that I can rehabilitate it like I did the second one (the first one required surgery).

Last week while carrying the bag of recycling from the trash compactor a piece of broken glass slashed my leg.  Darn, which means no water activities for awhile.  I was quite worried about contracting an infection for the first few days but everything is healing nicely at this time.  At least we had everything we needed in our first aid kit and Scott has taken many first aid courses.  Although I have taken the courses if anything ever happens to him he is out of luck because I will panic!

As it stands, we MAY be able to go down the Delaware River this Friday and arrive in New York harbor on Saturday night about the exact same time that our next set of company arrives.  One rule that always applies in boating…everything is weather dependent!

4 thoughts on “Baltimore to New York…or not?”