We celebrated my birthday, July 24, by traveling 30 mi. from Georgetown, MD to Summit North Marina in Bear, DE.  I received a pair of scissors and a flashlight that Scott had purchased in a marine store in D.C.  It’s really hard to buy surprise gifts for the other person when you live on a boat!  He really wasn’t supposed to buy anything since we bought tickets to Hamilton in NYC.  We decided the tickets would count for our 2nd anniversary, (July 16), my birthday, Christmas and every other holiday for at least a year.  To celebrate we chowed down on warm rosemary bread (I cheat and use a bread maker) and a “whole food plant based” homemade sweet potato chocolate cake with sweet potato icing.  I realize that it sounds yucky but it’s super yummy!  I am so blessed that everyday feels like my birthday! 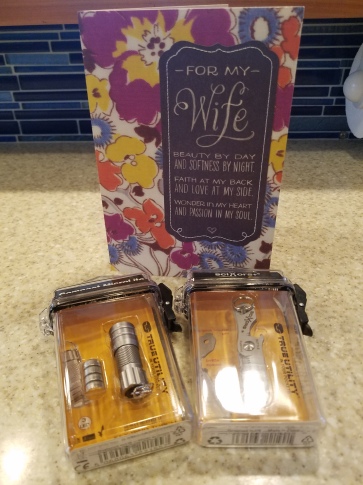 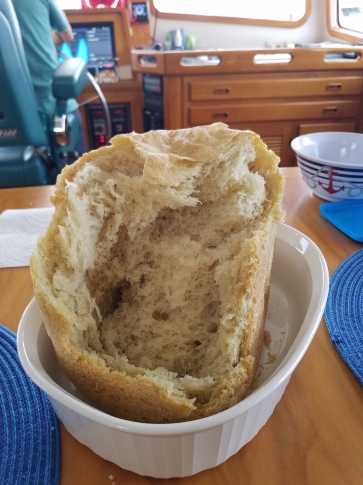 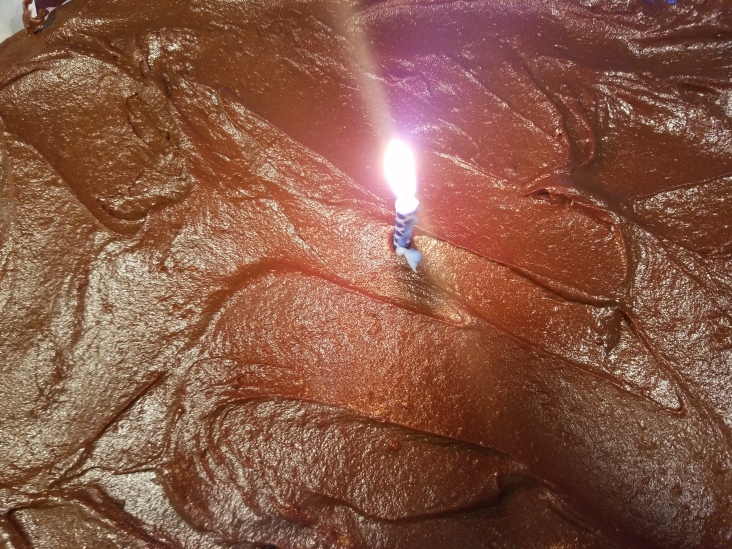 While eating breakfast on the aft deck we saw the woman on the sailboat behind us bringing in her water hose.  I commented to Scott that we hadn’t made any new friends and we really should go meet her and her husband.  Because we had anchored often or stayed in marinas that were nearly empty, or had boats with no people, we hadn’t had many opportunities to make new friends. So we struck up a conversation which lead to appetizers on their boat in which they had sailed almost around the world.  They had circumnavigated the Pacific and had gone from the Pacific Northwest around the southern hemisphere up to the east coast of the US.  Their Pacific navigation was completed in the 80’s and they only used a sextant.  It was an honor to visit their home, Sage.  I listened to their stories with awe and admiration.   I thirsted for their knowledge and drooled over their stories of exotic locations.  Connie and Tony on their 38′ sailboat are our new heroes!

I have a theory that couples that live on their boats are some of the happiest couples around.  If they didn’t get along or work well as a team they would have already quit the boating life.  Living on a boat is a lifestyle choice that that often requires some sacrifices so they are happy with their living situation.  And, most are retired or work part-time (repairing the boat doesn’t count as work!) so they can choose how to spend their time and their locale.  This makes for some really friendly folks.
I mentioned in a previous blog that a schedule is the worst thing that a boater can have.  Friends from St. Louis, Kathy and Bob, fly into Newark on Saturday so we MUST be there to pick them up!  We thought we had built in plenty of days to travel from Baltimore to the Statue of Liberty.  We left Baltimore on Thursday, July 19 and we could have easily made it to New York Harbor in 4 days.  Thanks to the wind and waves it is now Thursday and we have only made it to Cape May and have 2 more days to go.  We had a big boost from the tide coming down the Delaware today and it was gorgeous weather. We were hoping to spend a night in Atlantic City and check out a casino but they were completely booked on the one night that would fit into our schedule.  Looks like we are cutting it close…perhaps another over-nighter will fit the bill?

One thought on “Are we there yet?”