I had some concerns about traveling back down the East River with predicted storms without the stabilizers. We had to take a short detour back to Liberty Landing to fill up with water (400 gal.) and pick up mail and packages. We were down to about 15 gallon of water because it had been about 23 man days and I had started doing laundry. A man day is how we count each person on the boat for one day, meaning that 2 people staying on the boat for 2 days equals 4 “man days.” Our most important package was the electronics for the stabilizers which Scott immediately started to install as soon as we dropped anchor at Sandy Hook, NJ.  It only took him 3 hrs. of being stuffed under the helm to complete the project.  Note the hole in his shorts…his good shorts don’t last long because he is always working on a project.  Afterwards,  he was rewarded with a gorgeous sunset. 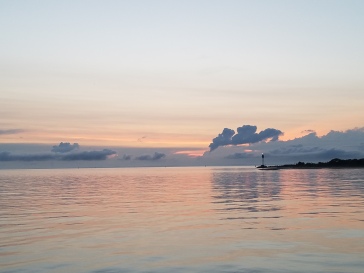 Hip hip hooray! The stabilizers work!!! The following morning we rose at 4:30 a.m. to head into the Atlantic to Cape May, NJ. That’s waaay too early for my taste but we had 111 mi. to go. The majority of the way it was a rough ride with 5-6′ seas and 15-22 kn. winds on the bow (front of the boat). It becomes rather dicey moving through the boat without falling over or bumping into something in that situation. We don’t use sharp knives or cook on the stove at these times so we had toast for breakfast and apples and microwave baked potatoes for lunch with some snacks throughout the day.  The stabilizers calm the side-to-side rocking but don’t effect the forward-backward rocking that we experienced.  We finally anchored at 6 p.m. and were exhausted!

The next day we slept in to 7:00 a.m. and traveled up the Delaware River through the C&D Canal to Chesapeake City. We anchored in the same tiny area we had visited on the way north but this time we only had to share the space with one other sailboat. Then we cleaned up and had date night for dinner and drinks at Chesapeake Inn. We knew we were back in Chesapeake Bay because at least half of the menu was topped with crab and Old Bay seasoning!  Although I try really hard to eat Whole Food Plant Based, sometimes I can’t resist seafood.  We highly recommend the crab and Monterrey Jack cheese topped french fries, the crab and shrimp topped pizza, and the pineapple shandy. We went all out!

We followed up with a day of rest while Scott researched why our batteries weren’t charging fully and why they were taking so long to charge. He is constantly being challenged to learn new things and to think out of the box to find solutions to new problems. We had a great yoga workout then the sweat continued to pour off of us the rest of the day as we were trying not to use the batteries for the air conditioners.  You might be thinking, “Wow, it seems like there is always something wrong on their boat.” You’re right. There’s a saying that cruising on a boat means doing repairs in exotic places!

Down the Bay we go for 69 mi. to St. Michaels, the quintessential and quaint Eastern Shore town with cute shops, restaurants, rich history, and historic homes.   Scott had spent most of the day still learning about charging batteries and related topics.  We anchored and took the dinghy to The Crab Claw for dinner.  The high was 92* with a “feels like temp” of 101.  Without the air conditioners  it was pretty dang hot.  We returned to the boat with the aft deck absolutely covered with about 1000 small bugs.  It was so disgusting!!!  There were probably only about 100 bugs inside the boat.

August 18:  It has been 5 years since our first date which was the first time we met.  Scott found me on Match.com and we had communicated for 6 wks. prior to him flying to St. Louis for our first date.  That very day he said he wasn’t leaving until I went with him or until I made him leave!  To prepare me for boating he took me to the mall and bought me 2 pairs of Sperry Topsiders! It’s been a whirlwind of fun, love and deep respect ever since.  We celebrated with a relaxed day of walking, shopping, eating lobster rolls, grouper sandwiches,  grilled Chayote Squash and a couple of Nanticoke Nectar IPAs. 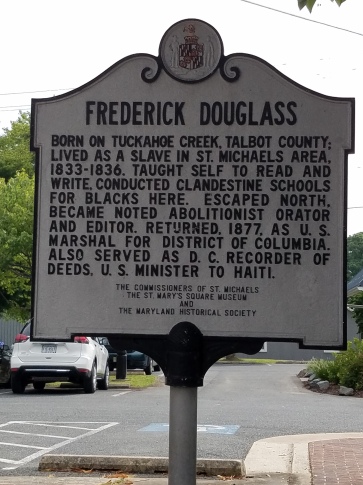 On Sunday we attended service in a beautiful old church that was established in 1672, did a little shopping and couldn’t resist eating lobster rolls one more time! The afternoon was spent exploring the Chesapeake Bay Maritime Museum which gave a visualization to many of the things I had learned in the book, Chesapeake by James Michener.  There is so much history and wildlife in this area that I have found to be fascinating.  I would highly recommend visiting not only the museum but the entire town of St. Michaels.

4 thoughts on “Back to the Bay: St. Michaels”