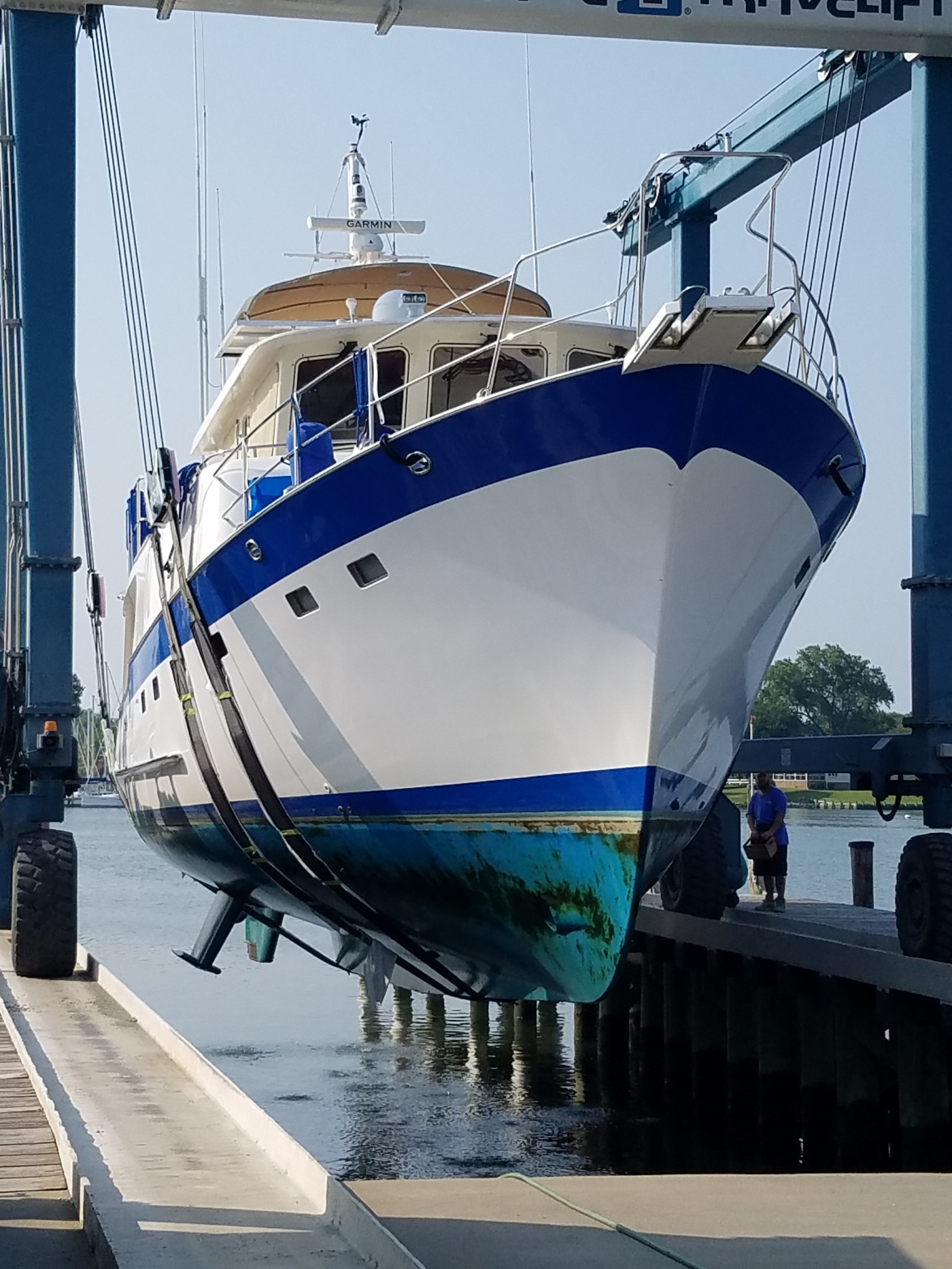 Unforgettable got all gussied up this past two weeks!  She weighs in at 100,000 lbs. with tanks half full so it takes a huge travel-lift to lift her big bottom out of the water! Prior to being pulled out of the water she had to be inched up to the ground to remove both anchors and all of the chain to make room for a bow eye. This is another item that Scott has been coveting. The bow eye enables us to put out less chain when anchoring.

While out of the water she received a new bottom paint (red) to coordinate with her blue boot stripe at the waterline. All of her zinks were replaced.  Zinks are sacrificial metal pieces that protect the metal in the boat from electrical currents in the water.  Her shafts and props were removed, new seals and cutlass bearings were installed and she had her line cutters rebuilt. We added two transducers for transmit signals downward to measure and “look” at what’s in the water below. She also got a ladder installed on the swim platform and a repair of a small nick in the bow.

Since purchasing the boat last August 26 Scott has had all systems inspected, updated, cleaned, etc, to insure safe travels and to avoid as many problems as possible when we are traveling.  As one knows, anything that is 15 years old will need some upkeep and replacement parts, especially in a salty and humid atmosphere. 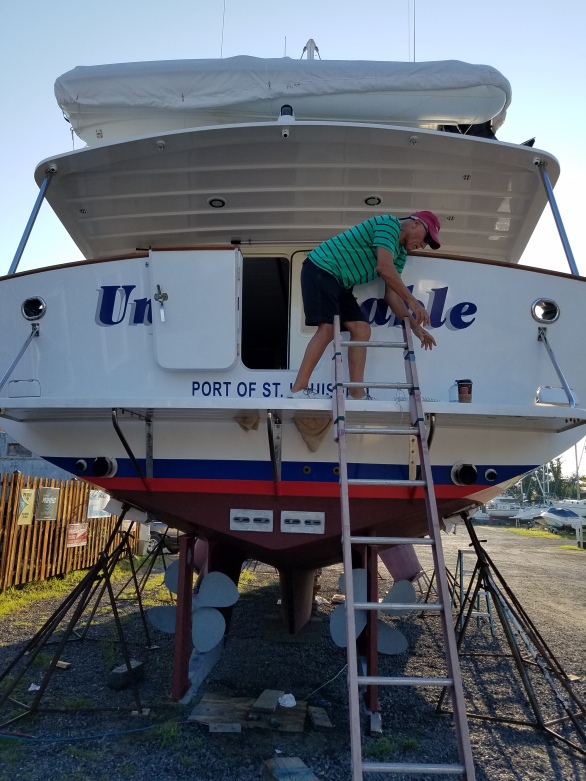 Other repairs were done while in the water such as reconnecting temperature sensors to the batteries, the installation of a flow sensor on the Water Puppy, the bow thruster filter in the hydraulic oil tank was replaced, the hydraulic coolers were cleaned, the installation of brass ball valves downstream of the air conditioner strainers, the oil and oil filters in the generators and engines were replaced , and the stabilizers’ bronze bearings were inspected.

There are several items that Scott did while “supervising” everyone else! He worked like a dog in 100* weather in a boat with no breeze from 7:30-4:30 every day which actually saved us quite a bit of money.

During the 8 nights the boat was “on the hard”, we stayed with daughter, Allegra and her boyfriend, Brandon. We had so much fun! Allegra had planned belated birthday activities for me, we had a sing-a-long as she played ukelele, we played the a Harry Potter board game, we went to the beach, etc. On the first day there we decided to try the yoga studio located near her apartment. Lucky for us, they were having a $30 for 30 days of yoga special. What a deal! The teachers, classes and studio are fabulous!!! What a treat to take classes everyday, and they are even better since I am taking them with Allegra. Scott even bought the same package after hearing how much we were enjoying the classes.  Spending quality time with Allegra and Brandon was such a blessing!

We have decided to stay in Solomons until the Kadey-Krogen rendezvous which begins Oct. 2. We have been on the go for 4 months and thought this would be a good place to hang out and relax. Docking fees are inexpensive ($1 per foot), Allegra and Brandon are here, all major stores are here and best of all…West Marine, Scott’s favorite boat store, is nearby! We will go for a few overnights in nearby anchorages to check all the systems on Unforgettable but chill for the month of September.