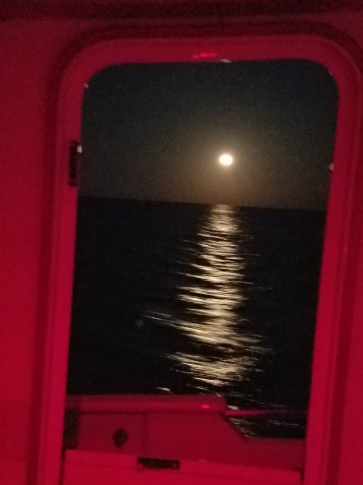 The full moon taken from the pilot house. The red light is for night driving.

It was a long 52 hour crossing to Charleston. Highlights included a spectacular green flash at sunset, a gorgeous bright moon, some leaping animals (not flying fish but don’t know what they were) and Scott catching another Mahi Mahi. The first 50 nm and last 75 nm were much rougher than I expected with the winds and seas on our beam. Although we took turns sleeping, in no way did our shifts total 8 hours per night. We were exhausted when we pulled up to the mega-dock in Charleston. 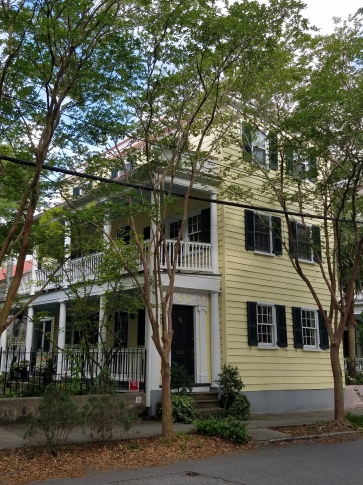 The fake front door opens to a “piazza” on the south or west side to take advance of cool breezes.

Charleston is one of my favorite cities: beautiful homes, architecture, gorgeous landscaping, safe streets and wonderful restaurants. Although we stayed 4 nights we limited ourselves to three nights of eating out. That was foolish! One evening we enjoyed a great dinner, drinks and learned how to “cut a rug” in a Charleston dance class with KJ and Matt on Chicane IV who we met at the marina last November.

We would love to schedule an extended stay in Charleston but we needed to move along to our next long term location in Solomons, MD. We did not relish the thought of going on the outside (back into the Atlantic) and chance rough weather so we headed up the ICW. Our trip up the ICW lasted about 3 nm when we remembered that the first bridge wouldn’t open for another 1.5 hours. So, a quick weather check on 4 different apps and a re-route into the Atlantic. The seas were predicted at a 2-3′ max until later that night. WRONG!!!!! We had 5-6′ waves at a 4 second period coming at us at 30* off the bow for the last 3 hours of our 7 hour passage. Steady winds at 26+ knot slowed our speed from 9k to 7k. This was our worst experience to date. Scott was sweating bullets once we turned into the long entry channel which put the wind and the seas square on our starboard beam with the rock jetty on our port side. Despite the churning seas, Unforgettable proved herself to be sea-worthy and delivered us safely to Winyah Bay.

Two days later Scott woke up with a toothache. This happened to be the Friday before Memorial Day. So, we weighed our options: do we hope it doesn’t get worse and wait to see a dentist in Belhaven the following Tuesday (a tiny town with no Uber and maybe no dentists) or do we nip it in the bud and find a dentist in a nearby town immediately? We opted for the later. Rarely are dentists open on Fridays but we were lucky enough to find one in Wilmington, we found a slip in a marina (also difficult on a holiday weekend) and hopped into an Uber. We did enjoy the accidental benefits of this unplanned stop by shopping at Harris Teeter, eating a lovely dinner at Bridge Tender and sleeping in air conditioning (temperatures were in the high 90’s!) 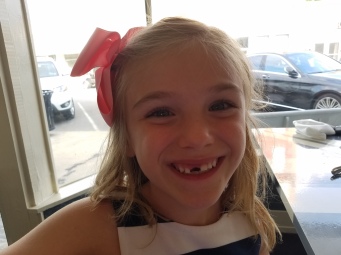 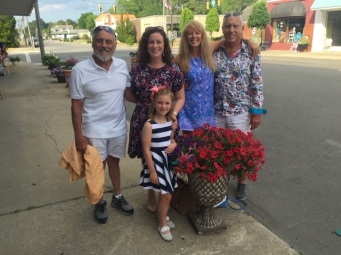 Onward to Belhaven, NC, where we met Scott’s brother (Steve), his niece and her family (Stephanie, Brooks and Eva) for dinner at Spoon River Artworks Cafe. The meal was rather disappointing but it was such a delight to spend the evening with the family and I just adore, almost 6 yr old, Eva. Belhaven is full of beautiful homes and the friendliest folks. In fact, every single person we walked by or drove past waved to us!

We had a long 77 nm trip to Coinjock then on to the wonderful Miller’s Marina. The Millers are Teri and Scott and also have a KK 58. They own a fabulous home and dock on the Chesapeake Bay and graciously allowed us to join them for two fun evenings. Jeff, on Sea Dweller, was also docked there so there was a lot of animated boat talk going on.

After a calm ride up the Chesapeake Bay and a night on the hook in the mouth of the Potomac we pulled into Solomon’s Island, MD which completed exactly one year of being full-time cruisers. We left Stuart, FL on June 1, 2018 and traveled as far north as Port Washington, NY then proceeded as far south as Georgetown, Exuma, Bahamas, then north again to Solomon’s, MD totaling 4507 nm. I have loved every mile and every minute. I have received quite an education on geography, history and seamanship. I have loved the big cities and the isolated anchorages. I have been blown away by beautiful waters and absolutely amazing wildlife. I have witnessed breathtaking sunsets, sunrises and full moons. I have even worked toward conquering my fear of the water and everything in it. Most importantly, I have enjoyed experiencing all of this with the love of my life, Scott Eason. This lifestyle relies heavily on the teamwork of close partners with good communication skills and we nailed it! Thank you, Scott, for the best year of my life!