After a smooth 33.5 hr. overnight cruise from Block Island, RI, we settled into a calm and peaceful anchorage for two nights near the mouth of the Sassafras River (just off the Chesapeake Bay).   We arrived in the bay with two full weeks of nothingness which brought us a sigh of relief.  How unusual for us!  We had no plans and were just a few hours away from our Solomon’s Island destination.  Typically we are rushing or have a tight schedule so our goal was to explore some new areas in the Chesapeake Bay in a leisurely manner.  We had buddy boated from Block Island with Lisa and Greg on Privateer and enjoyed dinner with them in the quiet anchorage.

Our next stop was a cozy anchorage up Mill Creek, near Annapolis.  This was located in one of hundreds of fingers off beautiful rivers and creeks around the bay that have lovely homes and gorgeous trees.   Literally, as soon as we dropped anchor we cleaned up and headed to Cantler’s Riverside Inn with Greg and Lisa where we pigged out on super large blue crabs.   They were so large that 12 was enough for 4 people.  It was a fun and tasty experience picking them apart on a butchers paper covered table but I ended up with 3 cuts on my fingers that took days to heal.  The crabs were sweet and do not need any sauces or additional spices other than the Old Bay that they used for steaming.  We talked with the man working the beds of crabs located by the dinghy dock and learned about the molting of the crabs.  He told us about that there is less than 1 day between molting and eating the crabs in their “soft” state before they re-form a new shell. 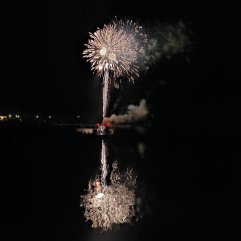 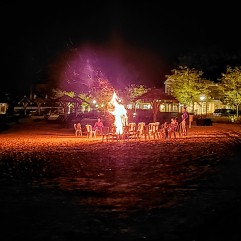 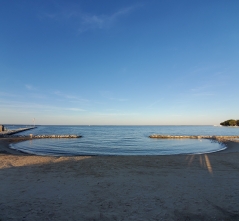 Happiness is a clean dinghy but it only lasts a day or two!

By the following morning Herrington Harbour South Marina had re-opened their fuel pumps and was selling diesel for $2.21 so we left asap to rush south to fill our 1760 gallon tanks with 1002 gallons.  Yep, that’s a boat load of fuel and we were a bit afraid that they would run out.  The marina had an olympic size swimming pool, lovely gardens, a dock on a jetty that reached into the Chesapeake Bay, private beaches, rides to the grocery store, and so much more.  We couldn’t resist and stayed two nights to take advantage of the unlimited free water in order to scrub the dinghy from bottom to top.  There were two wedding venues next to us, and we had a front row seat to the bonfire on the beach, fireworks over the water and two different bands.  That marina is hard to beat!

We had heard conflicting reviews on Oxford and Cambridge, MD, from other boaters.  Some people said there was nothing to do in one town and lots to do in the other and vice-versa.  So we decided to visit them both and make up our own minds.  First up was Cambridge, home of RAR brewery and Nanticoke Nectar IPA which I really like.  We were the only boat in the anchorage, Scott could walk a mile to the local YMCA to swim, and there was a convenient dinghy dock, all pluses.  The restaurants were average but the RAR Brewery was fun and we both sampled beers that we loved:  Grapefruit Nectar IPA for me and and Groove City Hefeweizen for Scott.  We enjoyed 4 nights there but had to leave because Unforgettable was anchored smack dab in the middle of the swim course of their upcoming Ironman Triathalon!

Although we are plant based we do sample the local fare.

A Skipjack, the Maryland state boat, is used for oyster dredging.

While anchored in the Choptank River there many watermen (and some waterwomen) catching crabs and oysters 24/7 in the anchorage.  The watermen are an endangered Maryland icon and we had the opportunity to chat with two of them as they delivered their crab harvest to the J. M. Clayton factory, the world’s oldest crab company.   Picking the crab meat by hand is traditionally a woman’s job and that is exactly what we observed.  Can you imagine the odor of the trucks loaded with empty decaying crab shells?  The stench was overpowering!  I can’t fathom how awful it would be in heat of the summer!  There were also several oyster sailing boats called skipjacks which is the Maryland state boat.  Dredging for oysters in a skipjack experienced a hey day in the early 1900’s but suffered declines during Prohibition then from diseases in the oyster beds.  Fewer than 20 remain in use today, most of which are on the Eastern Shore, and their dredging season is November – March. 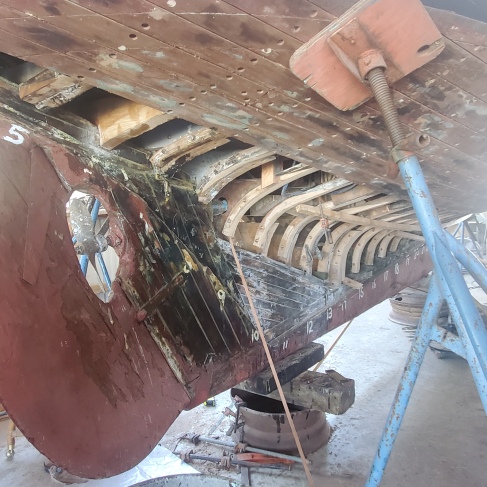 Refurbishing a boat at Cutts and Case Shipyard. 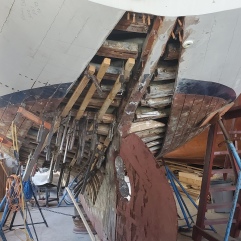 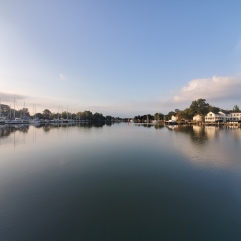 Next up was Oxford (pop. 651) which was definitely the town with nothing to do.  In fact, it was so quiet I could hear my thoughts formulating!  We visited Cutts and Case Shipyard where they make boats and refurbish old wooden boats.  We stayed an extra day to support the tiny library’s book sale which was a big event for the town because they had closed one of the streets.   I am collecting children’s books to take to the Bahamas this winter and was able to pick up a few nice ones.   We were the only boat anchored in Town Creek, a peaceful spot that was perfect for me to clean the stainless rails, hawse pipes, and bimini support.

On to St. Michaels which we visited last year but this time we anchored on the south side of town. We won’t return to this side due to a problematic dinghy dock.  Problem 1:  Poles sticking up in the water, 3 of which are unseen at high tide.  Problem 2:  A waterman moved our dinghy!  He took our stern anchor out of the water making a chip in the transom (the back wall) and tied it to another crab boat, then tied our painter so that we had to walk on another boat just to get onto ours.  Problem 3:  High fixed docks that were difficult to climb up at low tide.  Problem 4:  Shallow water.  At least we were able to attend church where they were having their annual “Kirkin’ o’ the Tartan”, a blessing of the Scots.  There was a rousing performance of the Chesapeake Caledonian Pipes and Drums which thrilled me but appalled Scott, since he has always hated bagpipes!

Our intention was to anchor in the Patuxent River in Solomon’s for two nights prior to docking at Calvert’s Marina but Scott suggested upon arrival that we get a jump start on our projects.  Therefore, we checked in at Calvert’s Marina, picked up box after box from Amazon from the office, did 10 days worth of laundry and got busy.  I received a much needed hair cut and stocked up on pantry items. Unforgettable received some nice upgrades like a new VHF fancy-dancy radio in the pilot house, new chairs on the aft deck, more dinghy fenders, and a thorough cleaning.  Scott splurged on another fancy-dancy item…a pair of Fujinon image-stabilized marine binoculars.  They will come in handy as we attempt to focus on a moving target while riding in a boat that is also moving. He also replaced the PLB (personal locator beacon), as the prior one’s batteries were outside their life range. 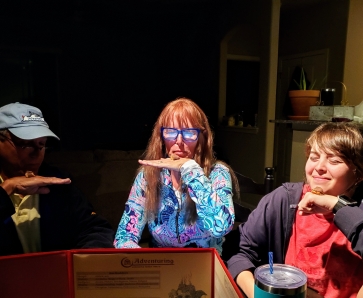 As always, the highlight of my time in Solomon’s is seeing Allegra (daughter), Brandon (her boyfriend), Simon (70 lb. 7 mth. old Bernese Mountain dog) and Marceline (tiny kitty)! We are a family of gamers and we created a new one…”Name That Candy Bar!”  We bought 10 candy bars, Brandon was the official, and Allegra, Scott, and I tasted.  Allegra won hands down with a perfect score, I got eight and poor Scott only got 4!  He grew up as a “chewy and gummy” type so had never tasted some of the contenders.  No, we were not gluttonous and did not gobble up all 10 candy bars! It was also fun showing off Simon at docktails in the marina one evening where he was a hit!  I am certainly going to miss these 4!

The bad news in our week leading up to the Kadey-Krogen rendezvous was Scott’s broken/infected tooth.  As I have mentioned in previous blogs, dental care on the go is a challenge.  Rather than waiting for his regular scheduled dentist appointment in St. Louis in December he found a dentist in Solomon’s because he had had a bump below a tooth for a awhile.  The dentist declared it broke in half and severely infected.  He promptly sent Scott to an oral surgeon to have it pulled.  Since this tooth had a root canal the only option was a bone graft then wait for a few months to get an implant.  In all, it took six appointments.  Thankfully, that we had a rental car for a week.

Excitement was building in the marina as fellow Krogenites arrived for the 30th annul rendezvous.  We look forward to making new friends, learning new things and lots of socializing!

2 thoughts on “Exploring the Chesapeake Bay”