As usual, here we are with a schedule!  Twenty days to travel from Solomon’s, MD to Stuart, FL.  With good weather this is easy as pie.  In moderate weather, if we don’t dawdle it is still easy as pie. Hopefully, the weather will cooperate and we can still enjoy some fun stops along the way.
Day 1 started off with a short run of only 25 nm.  Due to our late departure of 4:45 p.m. we were forced to anchor in the dark on the north side of the Potomac.  We normally avoid, if at all possible, entering or exiting an anchorage in the dark but we had ants in our pants and wanted to take advantage of the nice weather and get a few miles under our belt.  We appreciated our spotlight since one of the small sailboats near us did not have on their anchor light nor any other outdoor lights or AIS.  The following day we departed in the dark at 5:45 a.m. in order to arrive at Tidewater Marina in Portsmouth, VA.
Anchoring is typically our preference but since Nestor was predicted to bring high winds and heavy rains we chose the marina for a safe place to hunker down for
days 2 & 3.  Nestor did not live up to it’s expectations so we could have anchored after all.  However, we did enjoy a delicious tapas dinner at “Still” in Portsmouth with Gary and Torie on Gratitude.
Although Gratitude‘s owners had cruised through the Panama Canal, Galapagos and across the Pacific to Australia, they had not traversed the ICW (IntraCoastal Waterway).  We continued as their mentors and the four of us decided to make an adventure going south together.  On day 4, we left mile marker 1 of the ICW in Norfolk, VA at 7:30 a.m. and cruised a whopping 21 nm in the first 5 hours due to a variety of unforeseen difficulties .  When Gratitude pulled out of their slip another boat pulled out in front of them and had problems which delayed them.  Strike 1!  They “rushed” to catch up, as much as one can rush at 8 kn but as they were hurrying along they were “waked” by a boat causing their I-pad to crash into their computer and broke a few keys.  Strike 2!  The lock master closed the gate right after we entered leaving Gary and Torie behind to wait another 2.5 hours to pass through the lock and the coordinating bridge that followed.  Strike 3!  Being the first day after a storm many vessels that had been stalled due to Nestor were all heading south and there was a record breaking 97 boats that went through the lock that day.  The going was slow with the influx of boats, lots of snarky chatter on the radio, and slowing down to avoid being waked by the fast boats.  Basically, their first day in the ICW was a terrible, horrible, no good, very bad day!
After an uneventful night at anchor we headed to Belhaven on day 5.  At the last minute we decided to extend our trip another 17 nm to get a head start on the next day when we would travel into the Atlantic.  After settling into the anchorage in Snode Creek  we had just finished dinner and concluded that day 5 was, indeed, a much better day.  Then I received a text from our friends on Privateer saying that we were under a tornado warning!  Oh, my!  We had prepared for a myriad of emergencies but had not considered a tornado.  We lowered our antennas and put 12 of our 13 devices in the oven to protect from lightening. We considered setting out our valise life raft in case of a lighting strike causing a fire.  Gary and Scott were transfixed on the weather services and radars that repeatedly warned of water spouts that could turn over a boat.  It was an extremely intense couple of hours. I busied myself with cleaning and wishing I had a basement or at least a bath tub in which I could hide as I had as a child in Missouri.  In the end, the storm cell changed directions, went right over Belhaven, and we didn’t even receive a breeze…what a relief! We later learned that our vessel is way too large to be turned over by a water spout.
Day 6-7-8 were spent traveling 329 nm to Morehead City then out into the Atlantic and back  to Beaufort, SC.  It was a very long two nights as the seas were quite sloppy.  We had a following sea hitting our port stern quarter with a long period of approximately 12 seconds which normally would have been a nice ride.  The wind driven waves from the east made the boat slosh side to side as well as up and down .  This was not a good combo and I succumbed to seasickness.  After my first round of puking Scott offered to turn into Charleston rather than continuing on to Beaufort.  This would have meant only 6 more hours of feeling awful instead of 18 more hours if we continued to Beaufort.  Although I LOVE Charleston, I felt that I could tough it out and go all the way.  However, on my second round of retching I would have accepted a helicopter lift just to get off the boat!  I was worried that if I didn’t feel substantially better we would have to anchor until I recovered because I did not have the strength to work the lines and dock the boat.  Thankfully, by the second evening I was better and by the final morning I was almost normal.  I hate being a wimp! 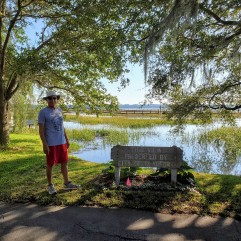 The sign reads, “This view presented by City of Beaufort.” There are such lovely views of the water, homes and live oak trees dripping with Spanish moss. 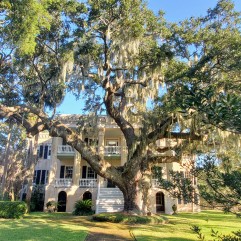 The live oaks can live more than 200 yrs. 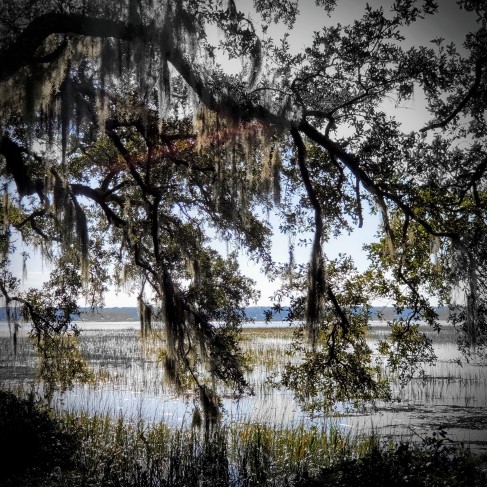 Ok, I know we went a little crazy over the views in Beaufort!

Fred on Casablanca was docked at the Beaufort City Marina and joined Gary, Torie, Scott and me for pizza that night and seafood at Saltus the following evening.  Day 8-9-10 in Beaufort were delightful.  We had warm weather, walked through the centuries old live oak trees, borrowed Fred’s car and shopped at the nicest Publix I’ve ever visited. Torie and I managed to slip away and shop for a few hours in the cute historic downtown area.

Unforgettable behind Gratitude in Beaufort. Photo credit goes to Gary. 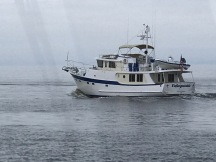 Fall in Beaufort.
After deliberating and studying charts and tide tables for hours upon hours the four of us concluded that we would go on the outside overnight and come in at St. Augustine.  The factors that go into planning our itinerary are many:  over all weather predictions, wind speed and wind direction in the Atlantic, wave height and period, tides and wind direction in the entrance and exit channels, daylight for entrances/exits/docking/mooring, depths, etc.  Our vessels’ insurance policy dictates how far south we will be covered until a particular date.  We crossed our line of coverage during the previous over night passage.  Gratitude felt fairly confidant that their insurance wouldn’t mind if they crossed their line just a few days early so we were all prepared to leave at noon on day 11. However, their insurance company poo-pooed the plan at the last minute.  They could only go as far south as Amelia Island while we headed on to St. Augustine.  DARN!  We felt bad abandoning them but we had to take advantage of the weather window in order to meet our deadline.  Schedules and deadlines are no fun! 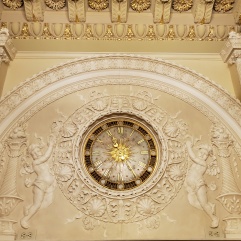 Thomas Edison’s clock in the Ladies’ Parlor at Flagler College.

Chandaliers made by Tiffany and the blue was the current shade of Tiffany blue at that time.

24 karat gold in the rotunda

Tiffany windows in the school cafeteria.

A fireplace in the ladies restroom.
Day 11-12 consisted of a lovely 46.5 hr smooth run which culminated with a easy catch of a mooring ball in St. Augustine.  Then the hot weather fun began! Greg and Lisa on Privateer joined us for drinks at Tiny Martini and dinner at Columbia.  On day 13 we had a huge dose of Henry Morrison Flagler.  We toured Flagler College which was originally Flagler’s luxury Ponce De Leon Hotel which was completed in 1888.  Tiffany stained glass windows surrounded the ballroom and gold lined the rotunda ceiling.  The hotel was one of the first buildings with electricity.  His friend, Thomas Edison, was responsible for the generators and created the beautiful electric clock in the Ladies Parlor.  There is even a fireplace in the ladies restroom!

Lunch at Alcazar Cafe in the pool with Lisa and Greg of Privateer.

The roof was glass and you can see the water in the bottom.
We then ate lunch in a pool!  For real!  Located in the Alcazar, another luxury hotel by Flagler, the 120’x50′ pool is now a restaurant in the Lightener Museum which we also toured.  At the time it was built it was the world’s largest indoor pool.  Not only was it a cool setting, it was a delicious meal! 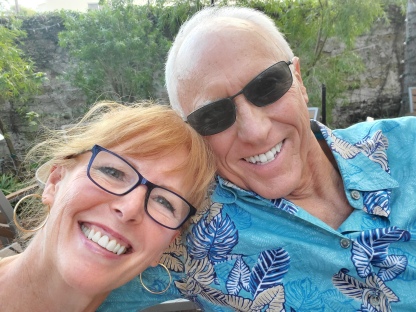 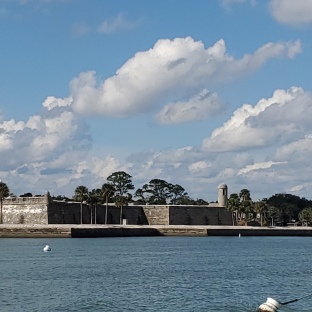 Castillo de San Marcos from our mooring ball.
We needed to get work and workouts accomplished on day 14 so we didn’t go into town until a Halloween dinner at Harry’s.  People watching in their costumes was our after-dinner entertainment.  A large portion of day 15 was spent trying to decide if we could stay one more night and still make it to Ft. Pierce on the 5th or if we needed to depart this fun city on day 16…stay tuned to see if we make it on time!