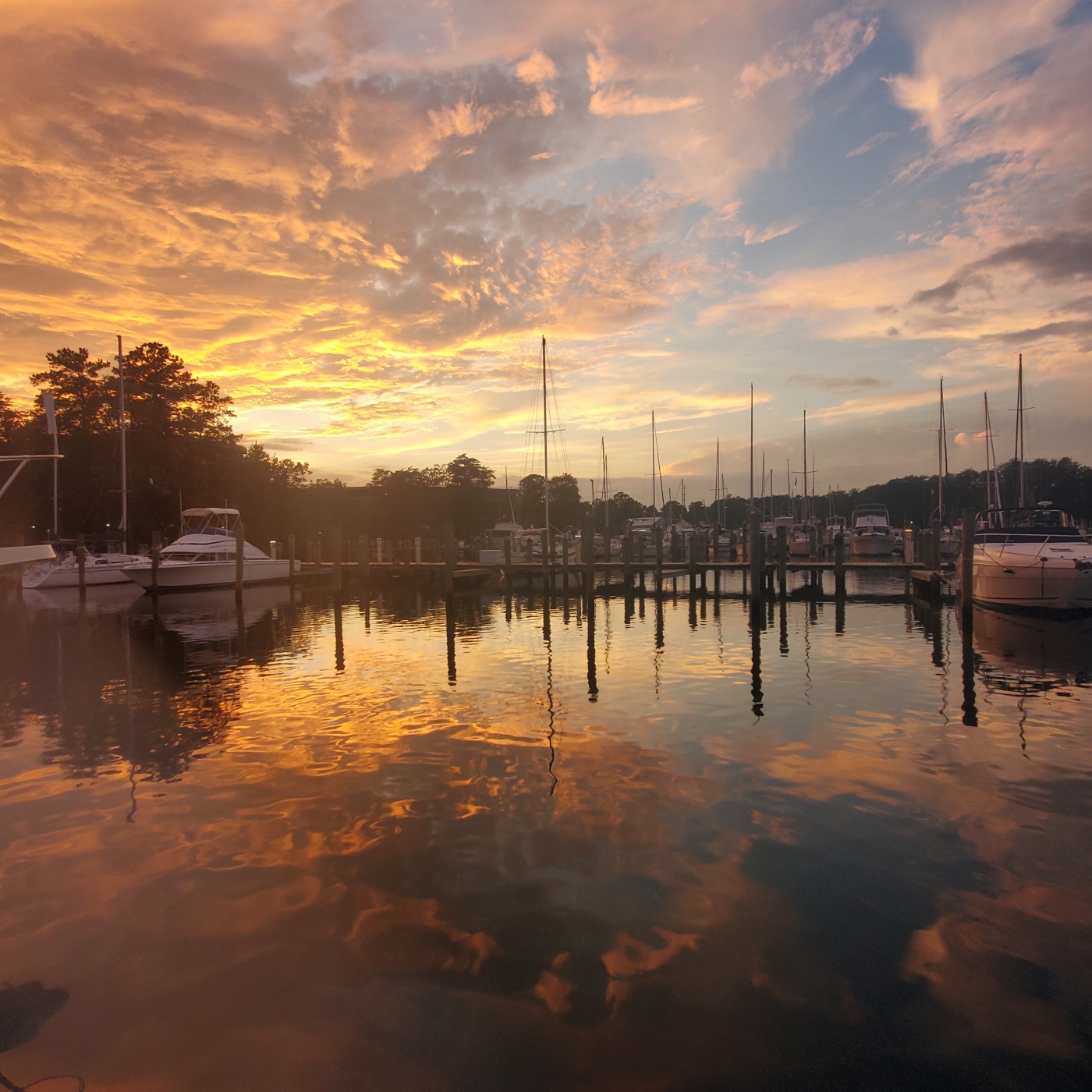 As a child, Labor Day was sad as it signaled the end to my favorite season, summer. I love the warm, sunny, long days of summer and dread the dreary fall. This year, however, I am a bit cheery as this iconic transition to fall also puts us that much closer to the end of the coronavirus. I often say there aren’t enough months of the year but for 2020 I believe that twelve months are more than enough! Let’s get this year over!

Spring Cove Marina, where we have been docked, has been a wonderful place for hanging out. The grounds are lovely and the folks are nice. Scott has treasured his daily swim in the 25 yd. pool. West Marine is less than a half mile away and many delicious restaurants are close by with ample outdoor seating. The grounds here are a park-like setting and their tent covering several picnic tables has been the perfect place for socializing, even in the rain. Several Krogens have been in the neighborhood, we have great boat neighbors (Ian and Margaret) and we have seen Jon and Dianne from church.

Right after our arrival here we had a little visit from Tropical Storm Isaias for which we were totally over prepared. Although we didn’t sit and stare at the wind gage during the storm, (we were busy practicing yoga and Zumba https://ztsfitness.com/), when we did check it, the highest gusts we saw were 48 knots. We had spent most of the previous day doubling the lines, removing the bimini/cushions, and adding fenders for naught. Although we all know it’s better to be over-prepared than under-prepared.

We traveled to Kent Island to have the inner glass replaced on our oven. Thank goodness the Kent Island Yacht Club was only $37 nightly to make up for the costly repair. En route to Kent Island we spent two hot, muggy nights anchored on the Wye River which was filled with hundreds of small stingrays. Thanks to Google, I learned that the Bay is home to the Atlantic Cownose Rays in the summer. They come to mate and 11 months later, return to give birth. When they are alone they appear to be a pair of sharks due to the tips of the wings peeking up as they glide below the surface. However, we saw many large schools creating the illusion of boiling water.

As we traveled through the Bay we observed a strange site, a crane on a strip of land that appeared to be in the middle of nowhere. Back to Google, we learned that the crane was perched on Poplar Island which is being rebuilt with dredged material from around the Bay. Due to rising waters, hundreds of islands in the Bay have disappeared. In 1847 Poplar Island boasted 1100 acres and a thriving community where two presidents visited. By the early 1990’s it had diminished to only 4 acres. One thousand acres of remote island habitat is being recreated.

Our second field trip was to Tangier Island, yet another sinking island due to rising waters. Tangier is listed on the National Register of Historic Places. Since 1850 this island’s landmass has been reduced by 67% and is expected to become uninhabitable in less than 50 years. The marshes are nesting grounds for several kinds of birds, ducks, and geese and the island is home to waterman who harvest oysters and crabs. A distinct feature of Tangier is the unique dialect spoken by the residents which is reminiscent of Cornwall and Devon in the UK. Tangier is known as the “soft-shell crab capital of the world.” We were so excited to explore this special island where there are no cars.

For 2 days Scott spoke with Mr. Parks, the owner of the marina, about our draft (depth of the boat) as we had heard stories of shallow waters there. We reiterated that we had a 6′ draft, although it is only 5’6″, and were guaranteed that there would be enough water. We timed our arrival on an incoming tide that was half up …….. As were were sidling into our spot on the dock WE GOT STUCK in mud in 4’6″ of water!!!!!!! We were so upset since we just had our bottom parts painted in July! Back into the Bay we headed with no Plan B. We cruised back across the bay and settled into the Piankatank River, in another lovely anchorage near Deltaville. One afternoon we enjoyed a fun happy hour outdoors with friends at Deltaville Marina while exploring by dinghy. We have not given up on Tangier Island, in fact, next time we will take our bikes so we can explore more of the area.

We picked up a few more toys this month, I guess if we can’t go out and have fun we can just stay home and have fun! Scott wanted inflatable stand-up paddleboards (iSUPS), I had been coveting fish lights and Scott splurged on a DJI Air 2 drone. Due to the excess of jellyfish I have been leary of using the iSUPS. Finally, I finally got up the courage to set out on my knees. I am a bit of a “fraidy cat” so will need to build up my confidence prior to standing in open water.

Our fish lights are a tube wrapped with LED tape inside of a plastic sheath. We dropped it in the water at anchor and saw several baby blue crabs and small fish but nothing exciting. When we get to clear water it will be thrilling to see beautiful marine life. Hopefully we can admire some sharks, rays and colorful fish! Maybe we can even catch a fish or two.

Regarding the drone…Scott is more excited about his drone than anything I’ve ever seen. He’s almost giddy! He has spent hours studying, watching videos and practicing. I believe there is a sizable learning curve to using this fancy machine. It will be so exciting to see the videos of spectacular scenery. Maybe someday he will record a whale near our boat!!!!

Scott is learning the new skill of using a drone AND he has mastered a new button on the microwave! He can now use the Time/Cook feature! I have learned how to tie two knots, the clove hitch for tying onto a post and the rail wrap clove for attaching the fenders to the rails. I have intended to master these knots for years but we kept forgetting. True confession…I live on a boat but am not really a swimmer. So, at long last, I have forced myself to learn to put my face under water and learn to swim laps. I can’t say I enjoy it but it is a good workout!

In September we are looking forward to the installation of flopper stoppers to keep us from rolling at anchor, more field trips around the bay and a second attempt at Tangier Island . As we prepare to head south again in October this month will fly by as the temperatures start to drop.

2 thoughts on “SUMMER’S OVER, HOORAY?”