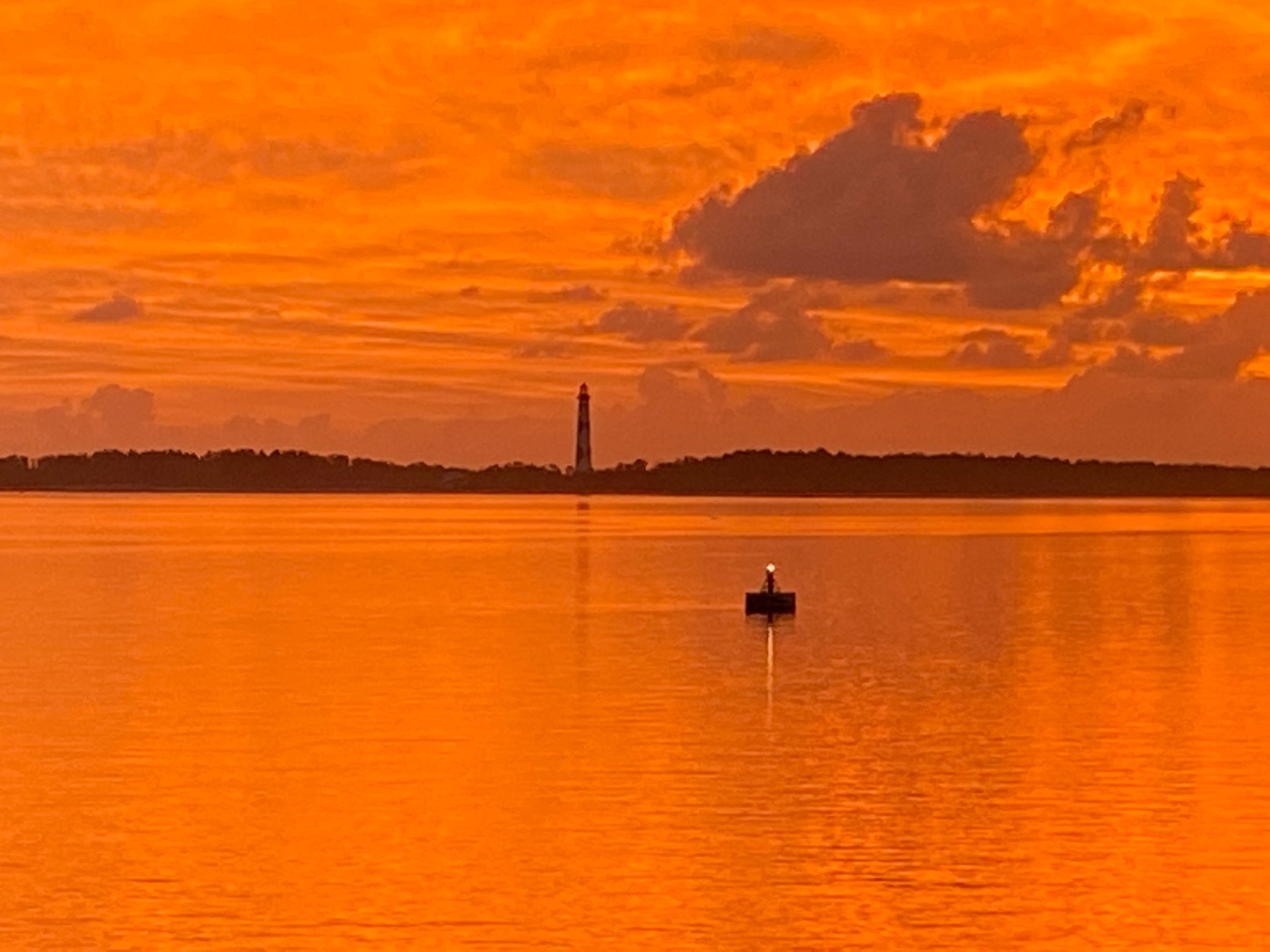 We haven’t had the pleasure of walking pristine beaches for quite awhile so our plan was to spend some quality beach time on our way south. Our first stops were uneventful, near Deltaville Marina and in Norfolk, VA. I’m always intrigued by Norfolk because the humongous Navy ships are amazing. We had never seen so many in port as we did this time. It’s possible to get up close and personal with container ships and a variety of boats, including floating dorms.

Once we reached Coinjock we knew it was time to begin planning and weather watching in order to hit some beaches. Ocracoke was on our list so we took a different route and stopped by the town of Manteo.

Charming and enchanting aptly describe this lovely town on Roanoke Island. We added an extra day to our downtown dockage located across from the Elizabeth II, a representation of the original English merchant vessels, and the Roanoke Island Festival Park. With a short walk across the bridge to the park and we learned about the island’s history from the angles of both the local Algonquin Indians and the early voyagers from England. The Fort Raleigh National Historic Site was an easy 3 mile bike ride away via a great bike path. There we learned about the first British colony in 1854 which was lost.

Nearby, the Elizabethan Gardens were filled with butterflies, gorgeous flowers and sweet smelling trees. In fact, everywhere we went in that town smelled like delicious perfume. From our marina we strolled around the town’s boardwalk and out to the Roanoke Marshes Lighthouse.

We had avoided OBX (Outer Banks of North Carolina) on previous travels up and down the coast due to skinny waters (shallow). Indeed, we saw a low of 1′ below our keel as we entered Manteo. The crossing of the Pamlico Sound and Albemarle Sound were also required to navigate to the islands necessitating calm winds to avoid big waves. One more challenge was shoaling. At the entrance to Manteo where the local knowledge of the dockmaster was essential. Heavy shoaling at the north entrance to Ocracoke had caused the markers to be located quite a distance from the electronic charts. Luckily, Captain Scott is cool and calm and handled everything with precision.

In my mind I had pictured Ocracoke as being enchanting like Manteo, or filled with character like Martha’s Vineyard, or possibly manicured and high-end like Nantucket. Boy, was I wrong! As delightfully surprised as I was with Manteo I was equally disappointed in Ocracoke. We rented golf carts for two days in order to see everything. We walked the .8 mile Springer’s Point Nature Preserve, visited the British Cemetery and lighthouse, and drove through the small town. I was looking forward to finding shells on the pristine Cape Hatteras National Seashore. Even the beach was a disappointment because there were so many big tired trucks littering the views. Sure, there were no hotels or houses but the trucks were eyesores.

Never fear, I would surely get my fill of beach time at Cape Lookout, one of our favorite US anchorages. We planned to stay several days to enjoy being surrounded by beaches, sand dunes, wild horses, and the punctuation of the Cape Lookout Lighthouse. Our first morning there it was as foggy as pea soup so we couldn’t even see the beach. At exactly 12:38 pm the fog lifted and we jumped into the dinghy. Scott decided it wasn’t a good idea to go ashore because it was sooo windy, coupled with the 5′ tide, so we enjoyed a nice ride around the bight. While viewing the wild horses on Shackleford Banks we started chatting with a couple in a nearby fishing boat. We learned why the bight was filled with fly fishermen. Apparently, October is the best season to land an albacore, a fun-to-catch but terrible-to-eat fish, which George H. W. Bush had made popular in 1997. The woman was kind enough to give me two beautiful Shark Eye shells that she had found there. What a treat!

Upon exiting Cape Lookout one must go 7 miles in the Atlantic to get back into the ICW at Beaufort, NC, or one can stay in the Atlantic to head south. We woke the second morning to a sketchy forecast for the next few days followed by the World Championship Speed Boat Races so we elected to move on.

I’m still pining for long walks on the beach and some exquisite shells. Or, if shade is available, some reading time would be appreciated. Perhaps we will get lucky at our upcoming stay Bald Head. Any way you look at it, from sunrise to sunset we have had beautiful days and have enjoyed our travels!

One thought on “OBX”