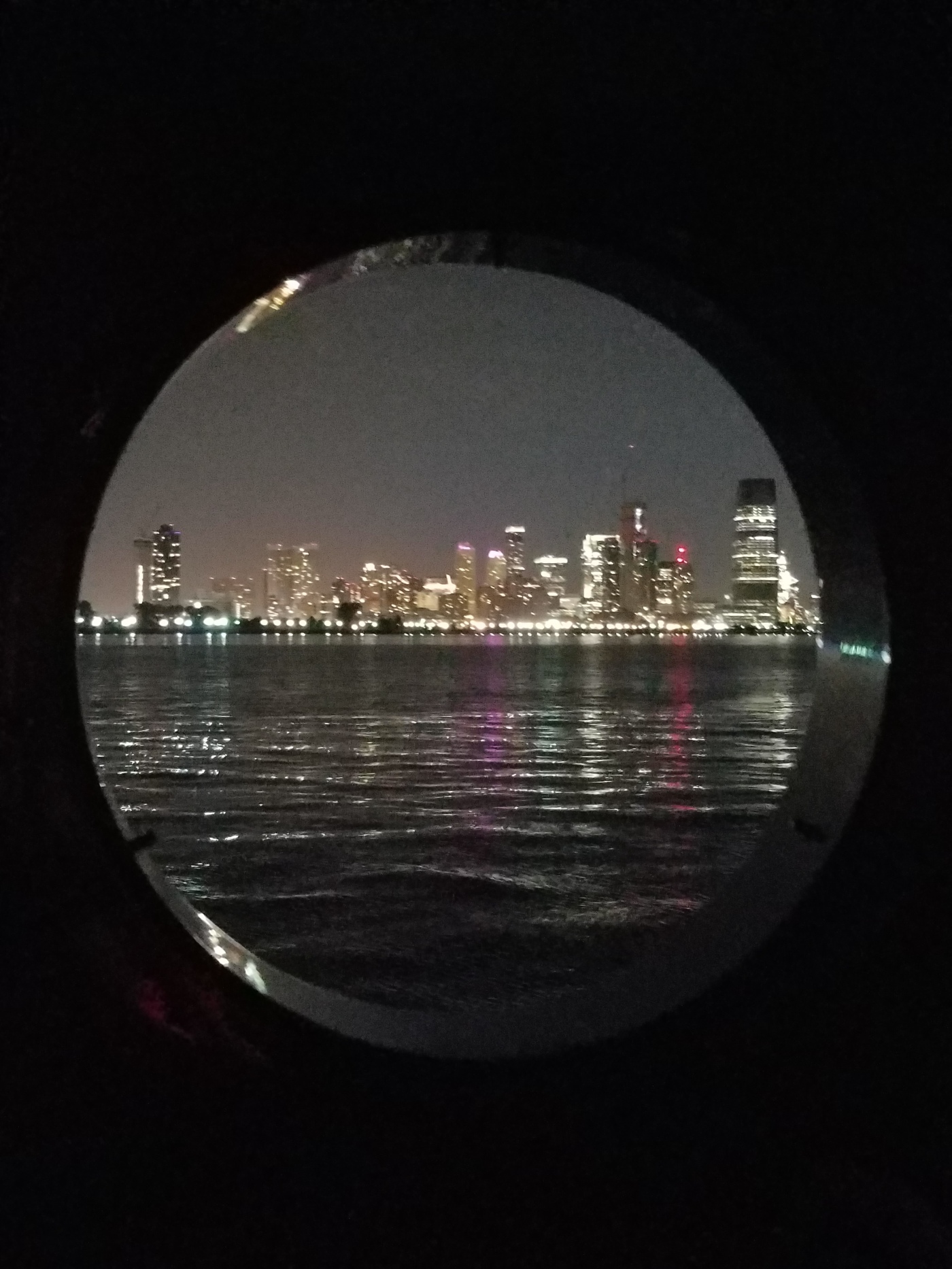 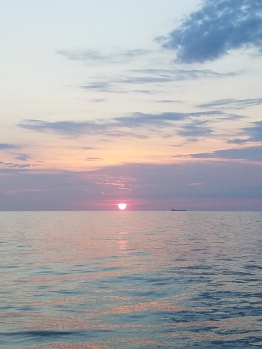 Sunrise in the Atlantic 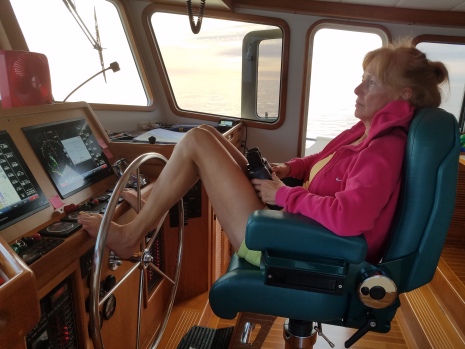 It was quite a sight watching the sun come up in the Atlantic then pulling into a hazy New York Harbor after traveling all night from Cape May, NJ.  The famous landmarks and bridges beckoned us into the upper bay of the New York Harbor.  We left Canyon Club Resort Marina which featured an infinity pool in which Scott enjoyed a nice swim while I walked 4 mi.  Friday morning we checked out and moved into a nearby anchorage for a couple of hours in order to time our arrival in NYC in daylight hours.  We had coffee and chatted with Tony from Sage (whom we met in Summit North marina) then headed out for our 4th over-nighter.  Waves were only 2-3′ but there were some decent size swells on the beam which made for a squirrely ride for the first half of the trip.  I cleaned up the galley after lunch then started feeling badly.  Usually a constant supply of pretzel crisps keeps me happy when I start to feel nauseous but I just got worse and worse.  Scott went to bed at 7 p.m. and then I truly got sick.  I will spare the details but just know that I had a terrible, horrible, no-good, very bad shift!  I was so thankful when he took over around midnight and I slept in the pilot house where my stomach felt the best.  I am definitely taking preventative medicine the next time we encounter a potential rough passage.

Manhattan skyline from the dinghy 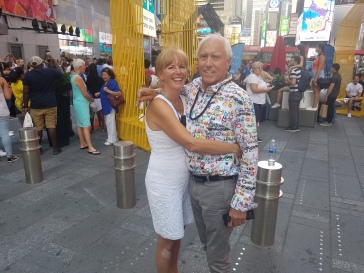 Back to NYC…we anchored next to the Statue of Liberty and there could not be a finer anchorage.  Yes, it was rolly with no protection but who cares when you are between Lady Liberty and Ellis Island facing lower Manhattan?  We could admire the Freedom Tower, Chrysler Building, and the Empire State Building.  However, we were exhausted so within 10 min. of anchoring we were asleep in bed for much needed rest.  In the afternoon we cleaned, exercised and took the dink (short for dinghy) to Liberty Landing Marina in Jersey City to pick up our packages.   This was the roughest dinghy ride I had ever taken.  The water was crazy busy with everything from jet ski tours to cruise ships.   Since we were anchored next to the statue, all the jet ski tours came right near our boat.  I was reminded of one of my favorite movies, “Hitch”!  We ate dinner at Surf City in Jersey City where Kathy and Bob were meeting us.

As spectacular as the harbor was during the day it paled in comparison to the evening at sunset.  The skyscrapers were like beautiful sequined gowns shimmering in the spotlights on a stage with pink ribbons of light in the sky for the background.  Breathtaking! 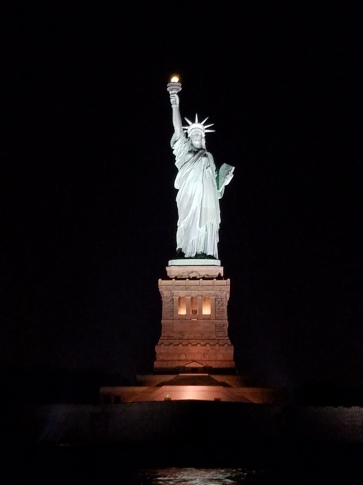 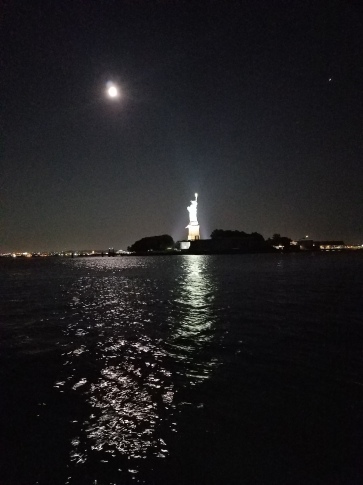 By ten when our friends arrived, the city lights were in full glory providing an unforgettable greeting as we rode the dink back to the boat.  With the full moon guiding us we circled around the Statue of Liberty while playing patriotic music on our phone.  Back on the flybridge the wind had unfurled the flag next to the statue and life just couldn’t get any better.  “I’m proud to be an American” played and we counted our blessings and appreciated our freedoms!

On Sunday we lunched at Sardi’s then saw “Hello, Dolly” which thrilled all of us.  Although disappointed that neither Bette Midler, Bernadette Peters nor David Hyde Pierce were in their rolls as advertised, it was still A+!  We then joined the throngs of people and gawked at the huge advertisements and interesting people in Times Square.  This small town girl loves the energy, lights, and excitement of the big city.   After much debate we finally settled on Glass House Tavern for a fabulous dinner.  Upon returning to the boat we hated to go to bed and break the spell of the city lights, moon light and Lady Liberty’s lights shining upon us.  What an awesome day!

The next morning we took a short cruise up the East River prior to docking in Liberty Landing Marina.  Just as we passed the Manhattan Bridge an alarm sounded…yowzer, it was the stabilizers!  Scott immediately called everyone at the Trac office.  He was in a bit of a panic since it was very rough from all the water traffic and he wanted to dock at slack tide. With no ready fix he centered the stabilizers and we made it into the marina.  After conversations with the Trac technician it was determined that they were working again but the electronics will have to be replaced.  This will be a huge chunk of money for parts alone.  Scott should be able to do the installation by himself.

We decided to check out Katz Deli where “When Harry Met

Sally” was filmed.  You may remember the scene…”I’ll have what she’s having”?  It was unbelievably busy!!!!  And expensive!!!!  Scott’s reuben was $22.45 and it only came with some pickles!  Admittedly there was so much meat it could have easily fed 2 people.  My bagel with cream cheese and lox was yummy like comfort food!  Next up was a trip to the observatory at the top of One World Trade Center.  Of course, it was a fabulous view.  It was a shame that we had moved the boat into the marina because we could have taken a cool picture of Unforgettable while looking down from the observatory. 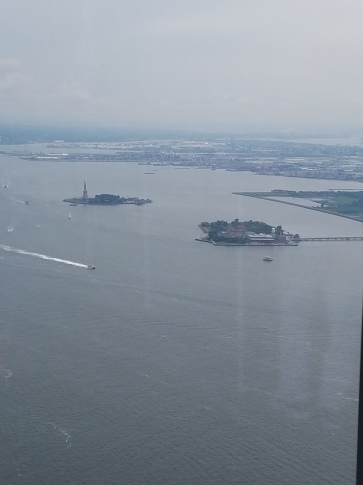 Statue of Liberty on the left, Ellis Island on the right 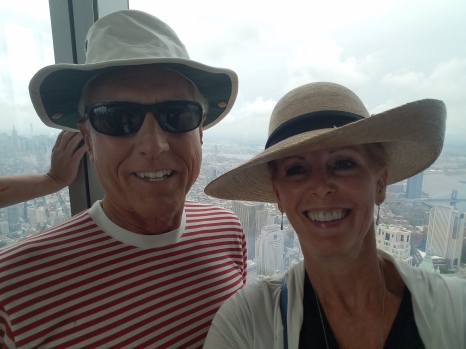 We also checked out nearby Oculus which was stunningly beautiful both inside and out.  It looked like a delicate dove taking flight on the outside.  The interior is bright, contemporary and airy filled with a mall and restaurants but ultimately is a major transportation hub.  Dinner was a short walk away in Little Italy.

On Kathy and Bob’s last morning with us we did yoga on the dance floor.  It was so much fun sharing the NYC experience with them.  They said it was an “Unforgettable trip!”