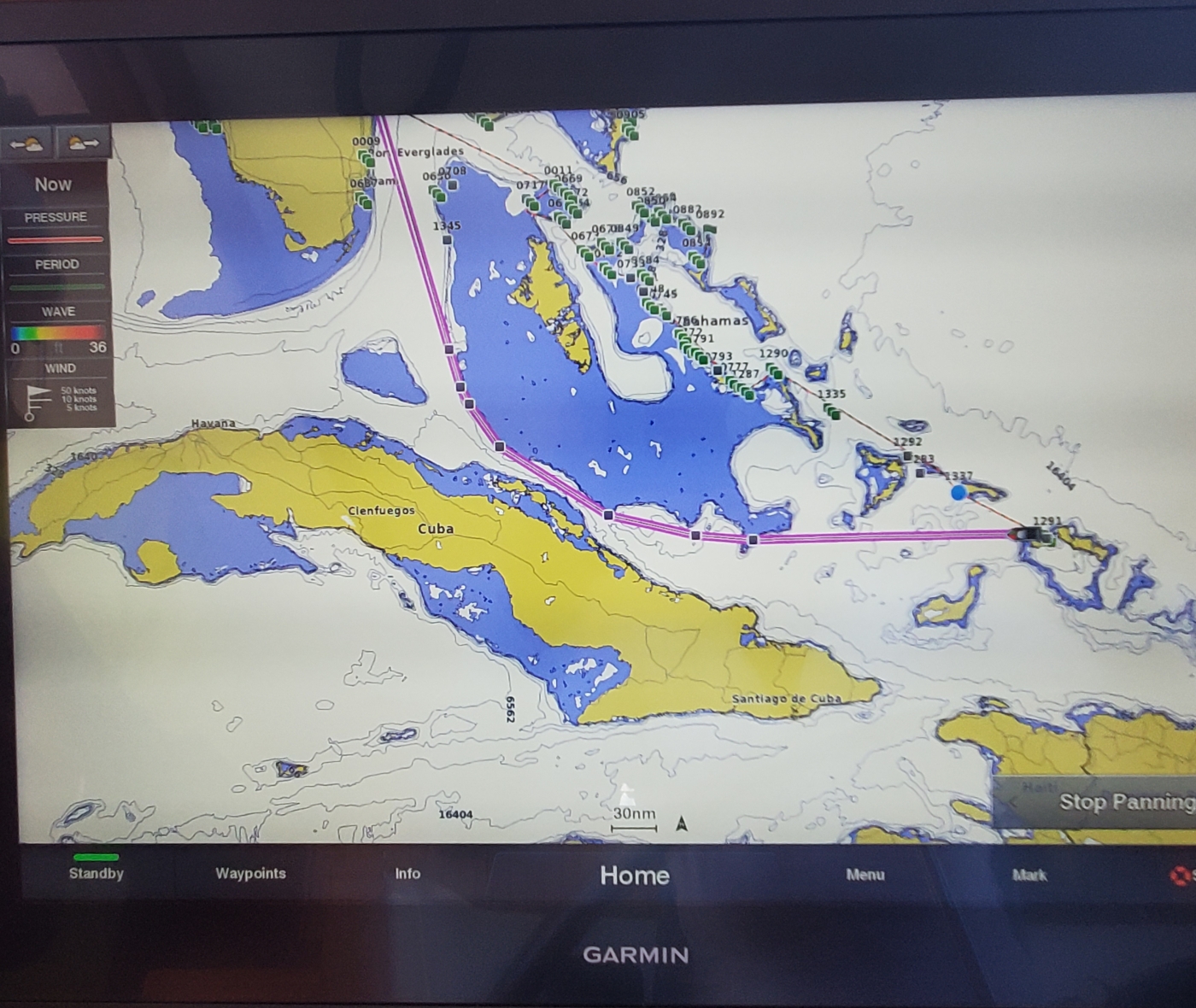 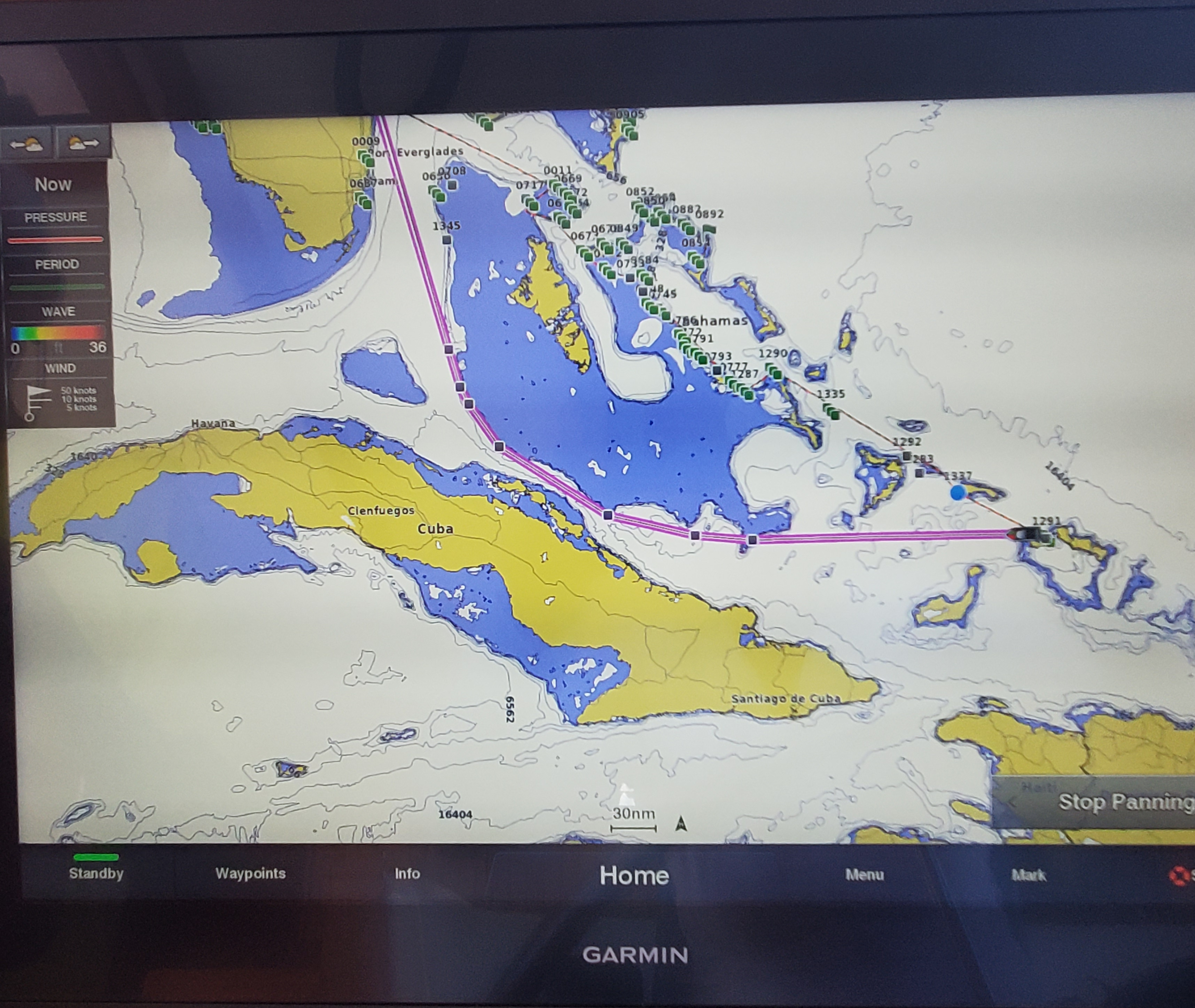 We put on our big girl and big boy pants and traveled 634 nm. (729 statute mi.) in 74 hours! We averaged 8.4k and traversed 4 countries ( Turks and Caicos, Bahamas, Cuba, and USA).  We did cut through the Bahamas rather than going south below Great Inagua despite the Bahamas being closed.  It was a wonderful trip.  A far cry from our first overnighter when I couldn’t go to sleep because I worried about every single sound and sway wondering if we might sink.  We did much better napping during the day and didn’t even get crabby.  It was so wonderful, at times, I wished we could just keep on going and never touch land and never deal with the crisis at hand. 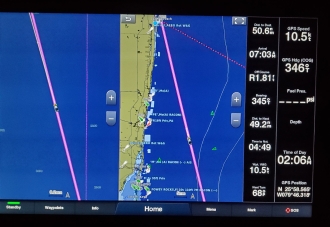 I didn’t get the picture of the highest speed. 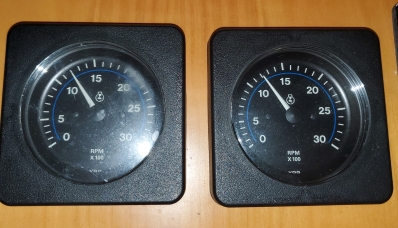 Lots of speed with little work from the engines.

We couldn’t have asked for better weather with beautiful sunrises and sunsets; we even saw a green flash the first night.  We understand that we got lucky with flat seas and realize that the trip could have been miserable.  Later, we enjoyed a nice rush from the gulf stream giving us as much as 11.4 k at only 1200 rpms.

The first day we cast two lines in hope of doubling our chances of catching a single fish but only got one bite. After perusing the Fishing for Cruisers book I concluded we were trolling too fast and our ballyhoo bait got beat up and fell apart. As we neared Cuban waters we put our poles back in the lazarette so no on would think we were fishing without a license in that country.

Speaking of Cuba, we were as close as 7 nm. from shore meaning we were in their territorial waters.  We saw the lights as we traveled through the international shipping channel, the Old Bahama Channel, which is located within their waters. We had quite a bit of trepidation regarding pirates in the Cuban waters especially since our closest portion was at night.  Preparation included reading the directions on our can of wasp spray and hand flares, and trying out the flare gun. Warning: the gun is quite loud and smelly. We even slept in our clothes. We contacted the US Coast Guard and they claimed we would be fine if we stayed within the shipping channel which was crowded with large commercial freighters. This triggered intense night time scrutiny of the screens unlike the previous night when I learned that playing solitaire by red light is rather challenging requiring me to “read” the red cards by counting the number of hearts or diamonds rather than reading the number in the corner!

Yesterday we slowed down to 4 k to fish again and we hit the jackpot…well, kind of.  We caught a barracuda, which we released, and had a gorgeous Mahi mahi on the line until we tried to lift it into the boat and it escaped.  DANG!  But the best part of all was watching approximately 2 dozen dolphins put on a show for us.  Scott saw one standing with only his tail in the water which he had only seen that done in performances.

As we were entering the Lake Worth Inlet at West Palm this morning we checked in on our ROAM CBP app and were denied entry!!! WHAT????  Instant panic ensued, and for me, the beginning of yet another colon cleanse!  The app didn’t explain why we were denied, it only said to contact the nearest port of entry.  Scott spent 2 solid hours making calls by phone and radio attempting to speak with a human.  Finally, one person said he would have to go to the airport here in Palm Beach upon which Scott emphatically replied to him, “NO WAY am I going to expose myself!”  Eventually we found a man in New York who seemed sympathetic who found someone here that explained that we were denied because we hadn’t answered their phone call.  We had been standing by the phone the entire time while waiting for our clearance and we had tested his phone’s volume by me calling him from my phone prior to attempting to clear.  The app needs some fine tuning!   In the denial they could easily stated why and given a number to fix the problem, however, they made no effort to ease the process.

Like Oprah, there are a few things I know for sure as a result from this trip: